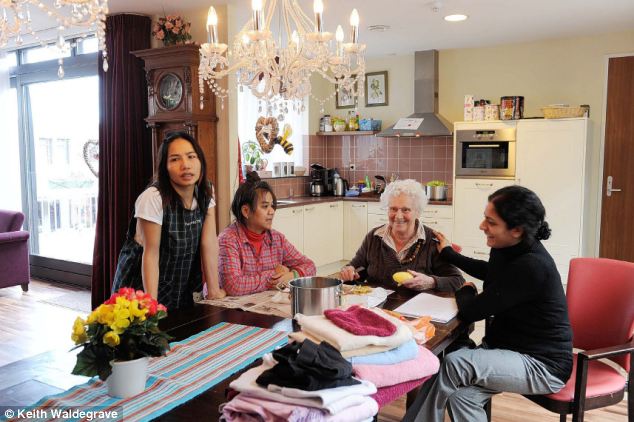 The world’s first—and only—village for dementia patients in the Netherlands is an ambitious experiment that began 20 years ago and has increased quality of life for dementia sufferers by allowing them to do the “same things they loved before their illness took hold.”

People need something to look forward to in life. The anticipation, excitement—those sheer moments of joie de vivre—are what living is all about. Have you caught what the key word is here? Living. That’s right, enjoyment and engagement are what keep us going in the every day. It’s only when hope is lost and stimulation is void when our eyes become glossed-over with depression, angst and misery.

Fortunately senior living communities today offer many wonderful alternatives to the white-walled, institutional and smelly nursing home images of the past with the myriad of amenities and services. But one such community took the idea of living further for a group of individuals suffering from moderate to severe dementia—a group normally considered past their prime of seemingly independent living. This community in Holland is known as “Dementiaville” and has many happy residents described as being “full of life.”

The Creation of Dementiaville: Dementia Care With a Spin

Despite strong opposition from critics, 20 years ago a community was created for people with dementia that allowed them to live without locks, with minimal medication, in their own homes, and doing daily things they love—including shopping, cooking, going to movies and visiting the barber or hairdresser. This ‘village’ included several lifestyle options that supported the dementia sufferers delusions of normal life where their doctors and caregivers jobs were to not only support the seniors, but also make their worlds seem as real as possible through food, music, individual home decorations—or anything else that catered to the individual sufferers fond memories of living life.

Six founders had the idea for this sort of ‘mecca’ for dementia sufferers, including Yvonne van Amerongen. According to Amerongen, “It was 1992 and Hogewey was being run as an ordinary care home: wards, common rooms where 20 people sat watching TV, doing nothing, waiting for medication, for meals. It wasn’t living. It was a kind of dying.”

By asking themselves how they wanted to live in their last days, the idea of Dementiaville was born. The idea of surrounding these seniors with people of similar interests, values and jobs in a living environment that promoted fun interaction and mirrored stimulating life was the catalyst for Dementiaville’s creation.

The Truman Show for Dementia Sufferers?

Is this kind of treatment/therapy moral? We all know that Jim Carey’s character in The Truman Show was liberated at the end when he learned the truth of the facade of his entire existence. But there’s a difference. The Truman Show was for popular culture, whereas, Dementiaville supports and, seemingly, liberates dementia residents from a more institutional—not to mention, more medicated—existence.

Hogewey (Dementiaville) takes residents back to their heyday, before dementia eroded any sense of identity. And the most impressive part? The treatment has been widely recognized as effective, despite the controversy surrounding the creation of the village two decades prior. The villages  cater to the times of the residents’ best years; so 50s through 80s decorations and way of life are the norm. Mood boards and activity engagement through fun interactions and everyday living—including a pub for resident bonding—to keep residents happy. “When we make up a home, there are different mood boards for decorating according to the lifestyle of the people concerned,” says Yvonne. “The mood boards create a feeling of the familiar, the safe. The family helps us choose.”

The Reality of the Illusion

While the villages are created to resemble normalcy, Yvonne reminds us of the reality: “‘The people who live here are deeply demented. They need 24-hour care. This is not the easy option. Everyone who lives here eventually dies here. At the end, it’s every bit as tough as you can imagine.”

Dementiaville is full of people at varying levels of the disease. Sickness and deterioration still happen, it’s just in a setting that enables an illusion of normal, every day freedom.

Get more information on memory care and dementia.

How do you feel about Dementiaville? If you were diagnosed with some form of dementia, would you rather spend your golden years in a community like the Dementiaville villages, or in a nursing home? Please comment below to let us know your thoughts.