Natural Causes: What Does it Mean to “Die of Old Age” 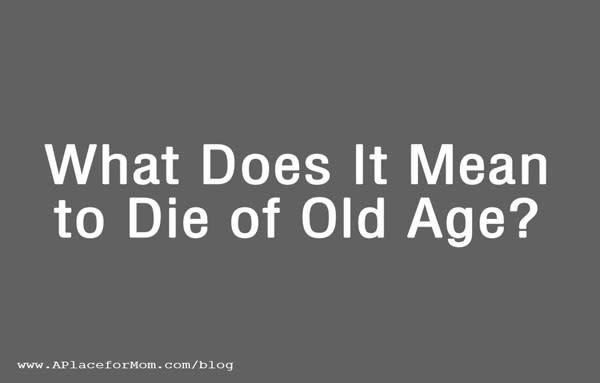 Old Age is not a Cause of Death

“Old age” is not truly a cause of death in and of itself. To “die of old age” means that someone has died naturally from an ailment associated with aging. The same usually goes for “dying of natural causes.”

Traditionally, government health authorities have required resident’s causes of death to be listed on death certificates. So, sometimes when an elderly person passed peacefully and not altogether unexpectedly, coroners would simply declare that the deceased had died of “natural causes” or even “old age.” In these cases, there was always a more specific cause of death, but it may not have been determined or thought to be worth mentioning.

However, professionals don’t always have an easy time identifying an underlying cause of death when the deceased has multiple underlying ailments simultaneously. As a Washington Post article states, “You know the cartoon where a character is driving an old car that suddenly falls apart, every bolt sprung, with the last hubcap rattling in a circle until it comes to rest? Some people die like that, too. The trouble is there’s not a good name for it.”

In cases when the root cause isn’t clear, sometimes a generic term like “multiple organ failure” or “debility” will be listed, but “natural causes” or “old age” as an official cause of death has gone the way of the buffalo.

That said, these terms live on in public discourse.

When “Natural Causes” is All We Need to Know

The practice of ascribing a death to “natural causes” lives on in the media and popular parlance. Because we are not doctors, we don’t necessarily need to know the details of a stranger’s last days. “Natural causes” suffices because clinical accuracy about an older person’s death is usually neither necessary nor desirable. In fact, detail beyond “natural causes” would be considered an undignified invasion of the privacy of the deceased and his or her loved ones. Similarly, at least in public discourse, when the deceased person has multiple underlying ailments and contributing factors, “natural causes” or “old age” is sufficiently accurate in that it recognizes the ambiguity of the cause of death.