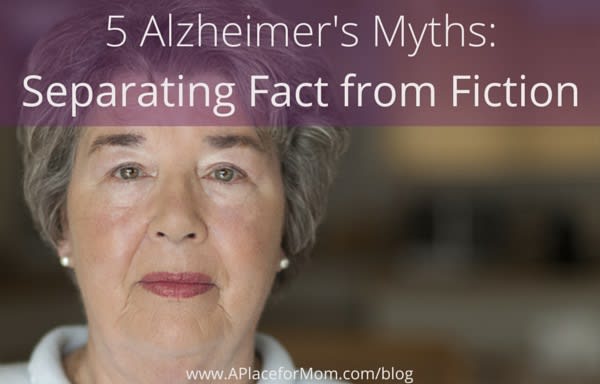 Public perception of Alzheimer’s disease is shrouded in rumor and misinformation — especially when it comes to understanding causes and symptoms.

A Place for Mom  discovered that common web search terms surrounding Alzheimer’s include: “Do only blue eyed people get Alzheimer’s?” and “Does Alzheimer’s only affect the elderly?” These terms tell us that people need to be better informed about the disease, and  awareness and understanding are the first steps to unraveling it. Read about some of the most common Alzheimer’s misconceptions.

1. “Alzheimer’s only affects the elderly.”

This is a myth. While the majority of people with Alzheimer’s are older than 65, there are certainly cases of individuals in their 30s, 40s, 50s and 60s with early-onset Alzheimer’s. Early-onset cases account for roughly 10% of the population  who is with the disease. While the elderly are more likely to get the disease — including half of all people older than 85 — young people are also afflicted.

Something to keep in mind is that aging does increase the likelihood for developing the disease. In fact, for each five-year span beyond age 65, the percentage of people with the disease doubles, according to the National Institute on Aging.  With a record number of baby boomers approaching senior citizen status each day around the world, Alzheimer’s disease is a global public health concern.

2. “My mom / dad remembers all kinds of things. He/she can’t possibly have Alzheimer’s!”

This is a myth. Alzheimer’s disease affects recent memories and the ability to retain recently-learned information. Past memories can remain locked in the brain, with vivid recollection and detail, including specific  smells, music, names and place associated with those memories. The majority of longer-held memories don’t begin to diminish until the disease progresses over time. Most newly-diagnosed Alzheimer’s patients will remember specific past memories and talk about them as though they just happened. It can be really disconcerting — and doubly amazing — for those witnessing the disease in their loved ones.

The brain is a complex system. So Alzheimer’s patients will have both good days and bad days (much like a normal functioning brain’s wavering clarity, depending on influencers like sleep, diet, stimulation, etc), but the good moments are typically for short bursts of time. Alzheimer’s disease is tricky as sufferers tend to retain basic social skills during the early stages of the disease, making it even more difficult to diagnose the disease; or even believe the diagnosis of a loved one.

3. “People with Alzheimer’s are oblivious to their symptoms.”

This is a myth. Most people with Alzheimer’s are very aware that something is wrong, at least part of the time,and especially in the beginning stages of the disease. Kind of like when a healthy person forgets what they’re looking for as they enter a room. They recognize there’s a memory gap. People with Alzheimer’s experience this same disruption with their synapse awareness. Memory lapses and trouble doing familiar tasks (cooking, following a favorite card game or remembering directions, for example) can be very disruptive, which is why many people with Alzheimer’s go through a form of depression. Insight varies by individual, however, and awareness fluxes each day.

As the disease progresses and symptoms worsen, awareness of the condition typically becomes foggy for most people; which can be a double-edged sword for both a caregiver and the person suffering from the disease.

4. “People with higher education levels have a faster memory decline.”

This is a myth. While higher education levels can help stimulate the brain, creating higher cognitive reserves, this does not necessarily mean it helps prevent memory decline or Alzheimer’s. People who have a higher education often have more “flexible brains” to help them adjust to their new circumstances, according to Dr. Jason Karlawish, an associate professor of medicine at the University of Pennsylvania and director of the school’s Alzheimer’s Disease Center’s Education and Information Transfer Core.

Studies done in assisted living communities have found that those who suffer from the disease come from varying socioeconomic backgrounds and education levels. And, on the flip side, some of the most cognitively aware people in their golden years come from varying backgrounds—from lawyers to plumbers to homemakers. Read more about this study in “The Secret to Staying Young and Avoiding Dementia.”

Dr. Karlawish did note that people with higher education levels seem to be diagnosed with dementia in the early stages as family members, as well as the individuals, notice the changes in brain functioning ability and communication sooner. “People who have more intellectual jobs and more education tend to have more IQ in the first place, therefore, they may be quicker to notice any changes they may experience.”

5. “Memory loss is an inevitable part of aging”

This is fact. Memory loss is actually a symptom of getting older. This myth actually brings me back to high school Biology class when my silver-haired teacher informed the class that “we all start dying the minute our cells stop producing at a certain rate.” Of course this morbid statement didn’t mean much to a young, seemingly-invincible group of teenagers, but it made me think (to the point that I’m obviously recollecting the lesson now). My professor continued to discuss that once cell reproduction begins to diminish, the body and mind start to slowly erode as they are no longer “fit” to replicate healthy cell production at the same pace (and, in-turn unhealthy cell production is what creates diseases, such as cancer and heart disease). This, of course, occurs over a long period of time and the physical changes people see to their hair and skin is representative of the similar degeneration the internal organs are experiencing.

While memory loss increases with age, Alzheimer’s and dementia don’t always occur. In fact there are many people who live to a ripe old age of 90 — and even join the ranks of the centenarians — who never experience dementia. Dr. Gary Small, director of the UCLA Center on Aging, reiterated that sentiment. “The brain tends to age like other organs, but it’s generally not incapacitated. The average person may only notice a delay in retrieval of information.”

Author
Dana Larsen
Sign up for our newsletter
Get insights and articles in your inbox.