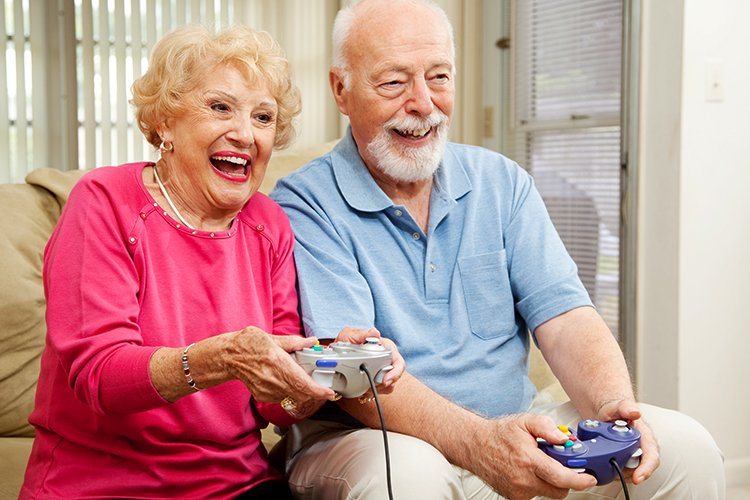 Retirement communities are no longer just destinations for those seniors looking to slow down. In fact, current trends suggest exactly the opposite to be true. As more than 77 million baby boomers reach retirement age, people are heading to senior communities well stocked with outdoor clubs more typical of the college than the traditional senior campus. People over 60 are also choosing to move earlier than ever to senior communities for security, personal safety, transportation, services, and to be closer to peers who share their passion for life.

“Seniors are more actively engaged in life,” says Tim Burris, A Place For Mom’s Market Development Coach for the Southeast region. “The clubs are responding by supplementing their staffs with independent activity directors to keep this new wave of seniors satisfied.”

Burris says one activity has enthralled seniors as much as it has their grandchildren, Nintendo’s Wii gaming system. Community members, some confined to wheelchairs, participate in a variety of Wii sports, though bowling is clearly the favorite. “Wii bowling is the way for groups to actively engage in a physical exercise without worrying about transporting somewhere,” he explains. “It also produces the fellowship that many community members seek. They are also very competitive.”

“This fellowship is very important,” Burris says, “because many people who are moving to independent living centers have no other family members. The community becomes their family.”

“Mom and dad move in together,” asserts Laura Palumbo, A Place for Mom’s Market Development Coach for the Mid-Atlantic region since 2001. “They make friends together with people who are already settled. Then, if one member of the couple should become ill or even die, the surviving individual has an established support network. It is hard to make new friends at 85 years old so to be in a community where that is the average age is very advantageous.”

Senior communities have needed to make adjustments to accommodate the recent surge in couples, Palumbo says. “Traditionally, single people move into retirement communities, so there was little design for couples. Now properties are taking two separate apartments, knocking down a wall and making a more comfortable two bedroom apartment.”

Couples are also arriving earlier in their lives, choosing to leave the daily hassles of home maintenance for the convenience of condominium or apartment living. The additional amenities such as laundry service, grocery shopping and delivery, even meal plans, further entice the retiree. And these seniors want to get settled and engage with a new community while they are young enough to actively enjoy the offerings.

“The whole situation [relocation to senior communities] was once not a very positive one and the time of transition was much more rushed and unsettling than it needed to be,” Palumbo concludes. “But the industry has become more competitive to attract more active, educated seniors who were previously uncomfortable with the term ‘retirement living’.”

“People want to feel ownership of their property, to maintain control of their lives,” says Marie Wall, Director of The Gardens of Wakefield Plantation in Raleigh, North Carolina. “People move here with the intention to stay. So we market The Gardens as a gated, planned senior community, because that it is exactly what it is. Our residents take trips and stay active. Some even prefer to go out to dinner most nights. Which is fine with us.”

Wall cites another recent trend in senior communities: the increased integration with general society through events and activities that draw from the general public. The Gardens hosted a “Spring Fling” last year, a festival celebrating the arts with music, visual art, and food. Two thousand people showed up for the inaugural event. Wall expects more guests this year.

“Sure there were a lot of extended families who came,” she says, “But there were also a lot of people in their late fifties who were considering what their next move might look like. Some of those people have signed up on our prequalified waiting list. [The Gardens age limit is 62+, with exceptions made for younger spouses.] We also assume the children of our residents will tell their friends who may have aging parents about us.

“We also run the local Parks and Recreation program for seniors, which brings many visitors from the outside community.”

Wall says children are now much more proactive in finding the right accommodations for their parents. They often take on the responsibility to alleviate the emotional strain for their parents, and because so much of the research can be completed via the Internet, an often confusing and potentially dangerous environment for seniors.

“We market quite heavily to the children of our demographic,” she states. “The kids can also get out and visit multiple properties more easily. Parents even trust their children to make the final decision and provide a deposit.”

Children and parents alike have always considered amenities when choosing a senior community, but the inclusion of a specific amenity, a pool or walking trail perhaps, now makes or halts the sale.

Security has become a significant selling point of senior communities. Even in areas with very low crime rates, residents take comfort in knowing there are cameras in the parking lots, a single entrance onto the campus, and that staff members are willing to ask strangers to identify themselves.

But the boom in home care agencies may ultimately produce the greatest impact on senior community development. In-home care professionals complete tasks ranging from medication administration to bathing to preparing meals. They greatly reduce the stress on residents and their families and extend independence.

Wall agrees with Burris on the positive impact of in-home care on senior communities: “The home care professional can come in for just two hours which allows the senior to live here independently.”

Seniors are looking to these communities for the same reasons many people consider planned, gated communities. They want a variety of amenities and security in tandem with support for their continued independence. Ultimately, seniors are selecting their own community as one might choose a vacation resort, or, as Palumbo suggests, a college.

“Seniors are moving into a secure, maintenance-free environment, where they can be more active and healthier without the stress and unpleasant tasks,” she says. “But ultimately they want to be with peers to go through this period in life, to share the same histories, and to maintain a very supportive social network of a cohort.”

High cholesterol is not something we come down with, like the cold or the flu. Nor is it merely part of the food we eat. Rather, it’s a condition that arises from the complex interaction between how we eat and live and how our bodies react to those choices. HOW CHOLESTEROL WORKS & WHAT THOSE…

MERRETT MANN Merret Mann is a gerontologist with a passion for working with elders and their families. She has over 20 years of experience working with seniors in a variety of settings and a strong commitment to quality care. Her entrepreneurial spirit has led her to develop a few businesses including a private duty home…

Causes & Care For many people, a trip to the bathroom is something they can easily delay. But for roughly 13 million Americans who suffer from urinary incontinence, holding it in isn’t an option. Although incontinence can happen at any age, it’s more common in older adults. According to the National Association for Continence, one…

Multiple sclerosis (MS) is a nervous system disease that affects the brain and spinal chord by damaging the myelin sheath-material that surrounds and protects nerve cells-thereby blocking messages between the brain and the body and causing a range of symptoms. It’s one of the most difficult diseases to treat and diagnose, and a leading reason…