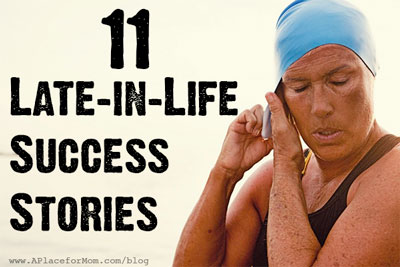 Not everyone can be a child prodigy, but we can all strive for late-life success. Read about the accomplishments of 11 remarkable individuals whose careers only got better with age.

In a society where genius is often equated with youth, and child prodigies are upheld for all to marvel at, we often forget about those equally amazing individuals whose accomplishments came later in life.

But luminaries like writer Frank McCourt, who published his first novel at age 66, or Diana Nyad, the 64-year-old who recently swam from Cuba to Florida, are no less admirable — in fact, we might think about respecting them all the more for their persistence and their long-term perspective.

Don’t believe me? Read on for the stories of eleven incredible individuals whose accomplishments reflect years of hard work, late-life career changes, and more.

Diana Nyad had dreamed of swimming across the Straits of Florida ever since she was 8 years old, reports CNN. After 5 tries spanning 35 years, on Monday, September 2, 2013, she finally accomplished her dream, becoming the first person to swim from Florida to Cuba without a protective shark cage. Her messages about late-life success: “One is we should never, ever give up. Two is you never are too old to chase your dreams.”

You’re never too old to get a high school diploma. That’s what we can learn from the story of Iowa woman Audrey Crabtree, 99, who was finally awarded her honorary diploma after 80 years of being one credit shy of graduation. After leaving Waterloo East High School in 1932 due to an injury, she remained out of school, first to care for her sick grandmother and then to get married (Waterloo Falls-Courier). She eventually attained professional success with her flower shop, and became the matriarch of a large family that includes five grandchildren and four great-grandchildren, but she always regretted never getting her diploma. That’s one regret she can happily wave goodbye to.

Noriko and her husband, Ushio, 86, are both practicing artists in Brooklyn and the subject of a new documentary called Cutie and the Boxer. Her career was overshadowed by his for much of her life, but as NPR reported recently, she’s coming into her own, with striking works painted directly on gallery walls. In a 2002 artist statement, she said, “I learned etching by chance when I was in Kyoto and Tokyo one month in 1995. Since then I found my world and my words, I stopped to be the apprentice of my husband. I started to learn to walk by myself. Maybe that is the time I started my art.”

After growing up in Ireland during the hard times of the Great Depression, Frank McCourt served in the U.S. Army during the Korean War, went to college on the GI Bill, and then spent 30 years as a teacher. It was only after he retired that he decided to write about his childhood, publishing his memoir Angela’s Ashes in 1996, at the age of 66, to both popular and critical acclaim. He penned two more memoirs before his death in 2009 (Biography.com). Though he more than made up for it later, his early years offered few opportunities to excel: “When I look back on my childhood, I wonder how I survived at all,” runs an apt quote from Angela’s Ashes.

Dr. Ruth Westheimer was working at Planned Parenthood when, in 1980, she gave a talk to New York broadcasters about “the need for sex education programming to dispel the silence around such issues as contraception and unwanted pregnancies” (Biography.com). She was 52 years old. Three years later, her Sunday talk show Sexually Speaking was attracting a quarter of a million listeners every week, and by the following year, it was nationally syndicated. Since then, her career has encompassed TV shows, advice columns, and books, and she continues to maintain a private practice.

Though he’d always been interested in acting, John Mahoney—perhaps best known for his television role as Martin Crane on Frasier—didn’t make the transition into acting until he was 37 years old, quitting his day job as the editor of a medical journal to pursue a stage career (IMDB.com). He said he gradually realized medical journalism wasn’t for him, and asked himself, “Is this going to be it for me, am I going to be spending the rest of my life writing about cataracts and hemorrhoids?” His first feature film role was in 1980, he played Frasier’s father from 1993 to 2004, and he continues to be active on stage and screen.

“I’ve played mother to everyone but Attila the Hun,” said Estelle Getty in her 1988 autobiography, but we know her best as Sophia, the mother of Bea Arthur’s character Dorothy on the TV sitcom The Golden Girls. She acted onstage for nearly 50 years before her first onscreen opportunities, but then her career took off: she was nominated seven years in a row for an Emmy award for her work on The Golden Girls, finally winning in 1988. Says her New York Times obituary, “It was a remarkable coup for an actress then in her 60s who had worked for decades with almost no recognition at all.”

The provocative artist Louise Bourgeois created drawings, prints and sculptures throughout her life, but only became well known in her early 70s after a 1982 retrospective at the Museum of Modern Art in New York. The New York Times describes her successful career as a confluence of many factors: “In an art world where women had been treated as second-class citizens and were discouraged from dealing with overtly sexual subject matter, she quickly assumed an emblematic presence. Her work was read by many as an assertive feminist statement, her career as an example of perseverance in the face of neglect.” Her persistence paved the way for the careers of generations of younger women artists.

In Phyllis Diller’s pre-comedy life, she studied at Chicago’s Sherwood Music Conservatory before eloping, moving to California, and having six children. Then, in 1955, at age 37, she was working as a journalist for a Bay Area newspaper when she appeared as a contestant on You Bet Your Life, Groucho Marx’s game show. Her comedy debut in San Francisco happened soon afterward, leading to her first stage and screen acting appearances in 1961. Besides a long acting career, Diller was an accomplished concert pianist and author of five bestsellers (Biography.com).

It may seem hard to believe, but the director of The Hurt Locker and Zero Dark Thirty and the first woman to win an Academy Award for Best Director, didn’t begin making movies until the 1980s, after an early career as a painter and conceptual artist in Manhattan. Her second career in film has been high profile and history-making, and not without controversy due to the provocative topics she fearlessly tackles in her movies. Part of the reason she switched to film was to reach a wider audience, regardless of topic. “Holding up a contemporary mirror is more attractive to me now than ever,” she told TIME magazine earlier this year.

Often described as unpretentious and modest, Tokyo real estate developer Taikichiro Mori was uncomfortable with fame, despite being ranked the richest man in the world by Forbes magazine for two years straight (New York Times). He didn’t start off as head of a building company, but it’s safe to assume that his 30-year career as an economics professor didn’t hurt his chances of success. At age 55, he inherited his father’s business, which included two buildings; from there, he founded a development company that would go on to construct over 80 buildings in booming postwar Japan. In 1992—when he was 88 years old—he was worth $13 billion: twice as much as Bill Gates.

What later-life success stories do you have to share? We’d love to hear them in the comments below.