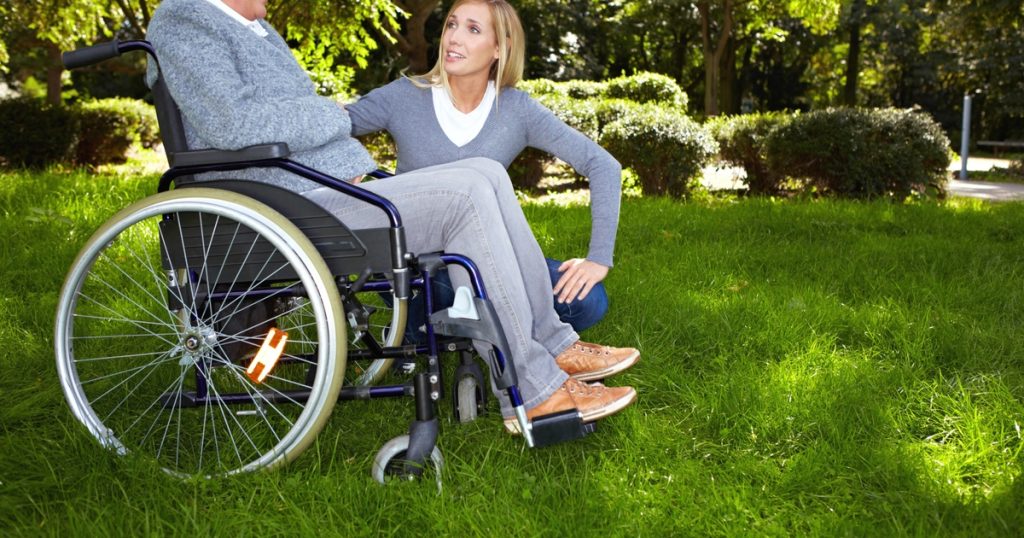 Look around and you’re bound to find a caregiver. These special people are everywhere. You may run into them at school, the store or work. You might even find them on your Facebook or Twitter feed. These exceptional caregivers are everywhere, and yet they’re rarely seen.

Many caregivers are isolated and many of them don’t ask for help, even though they desperately need it. Isolation and loneliness are a few of the common themes mentioned by these three caregiving advocates that we spoke with, below.

Learn more about each of these exceptional caregivers and the unique stories they have to share.

His story: In 1997, at the age of 50, Carlen’s wife Martha was diagnosed with Alzheimer’s disease. With three children, two in college and one in high school, Martha was active in her community — she served on several county boards, and ran for State legislature just a year before her illness. The diagnosis of Alzheimer’s was difficult for both Carlen and Martha to accept, especially because she was so young. “With Martha, her doctor and the medical community made it clear that there was no cure,” Carlen says. “But I didn’t want to accept ‘no.’ I searched for helpful hints, some sort of answer. Of course there is no magical answer.”

Carlen cared for Martha for 17 years — the first 10 of which she lived at home. During this time a local organization helped subsidize the cost of having in-home caregivers so he could continue to go to work. “Even though I had help, it was a tough road,” he says. Caring for Martha before and after work fell solely on Carlen, and when caring for her at home became too much for everyone, Carlen had to move her into a nursing home.

His challenges: For Carlen and all the caregivers A Place for Mom spoke to, caregiving was not a choice, but a duty to a loved one born out of a sense of devotion. An overwhelming process, caregiving is fraught with challenges and roadblocks every step of the way. Some of the biggest challenges Carlen had to overcome included:

How he’s helping other caregivers: Almost as soon as he learned of Martha’s diagnosis, Carlen started keeping a journal as a “matter of survival,” he says. “I was gathering so much information and I needed a repository to keep it all. I kept a journal for 10 years, until 2008 when Martha went into a nursing home. I didn’t crack them open again until after she had passed and I had decided to put a book together.”

His book, “A Path Revealed: How Hope, Love and Joy Found Us Deep in a Maze Called Alzheimer’s,” isn’t a guidebook or self-help book. “Plenty of those exist, many with good practical advice,” Carlen says. Instead, his goal was to explore the painful emotional and spiritual issues that are sure to surface with a crisis like Alzheimer’s. “If you ignore those spiritual and emotional issues you do so at your own peril,” he warns. His book aims to help others face and overcome the emotional and spiritual journey of a family crisis. “I could have used some help, insights like this,” he says.

How he managed: For Carlen, navigating the system for 17 years wouldn’t have been possible without the help of his children and church community. “My children offered to give me one weekend a month off,” Carlen says. “It was a gift I can never repay.”

Their journey, although it wasn’t a choice, offered some benefits to the Maddux family. “My three children are a lot closer to each other than I think they would be otherwise,” Carlen says. “As a family we stick together and have each other’s backs.” For Carlen in particular, caregiving offered him a new outlook and approach to his spirituality.

Her story: When Feylyn was an 11-year-old, an incorrect spinal surgery left her mother permanently disabled and in pain, which meant that Feylyn, and to a larger extent her older brother, became her sole caregivers.

At the time, Feylyn’s brother, who was just 19, dropped out of college, got a full-time job, took on the mortgage and not only cared for Feylyn, but also took care of all their mother’s medical and personal needs. Like many child and young adult caregivers, Feylyn and her brother had no formal support from outside organizations. Feylyn saw, through her brother’s experience and her own, how caregiving shapes a young person’s identity.

Feylyn’s experience led her to become a PhD candidate at the University of Birmingham. This amazing millennial is in the fourth year of her doctoral research, which focuses on identity development of young adult caregivers (caregivers who are 18-25 years old).

According to Feylyn, there are approximately three million young adult caregivers in the United States, but she cautions that these are conservative estimates based on a study conducted over a decade ago. The fact that data about this group is so old exemplifies the lack of knowledge, research, support and understanding about young adult caregivers. Feylyn is working to change this, however, as she raises awareness about young caregivers in the U.S.

Her challenges: When it comes to caregiving, most of the attention is on baby boomers and the sandwich generation. There is little to no attention given to Millennial caregivers. This group of young people are caring for grandparents, parents and siblings. They experience the same stigma that Carlen Maddux mentioned, but the stigma is compounded because of a lack of awareness and understanding by peers, educators and the general public. When most people think of a caregiver, they don’t think of children and young adults.

According to Feylyn, some of the challenges that child and young adult caregivers face include:

How she’s helping other caregivers: Feylyn’s experience motivated her to work as an advocate for young adult caregivers, which is why she joined Professor Saul Becker, world-renowned expert on young caregivers in the United Kingdom to expand awareness and research. Her hope is to bring some best practices back to the United States, and to “honour the sacrifices my brother has made,” she says.

Feylyn is raising the profile of child and young adult caregivers by blogging for publications like the Huffington Post, hosting podcasts, and speaking throughout the U.S. and the United Kingdom.

How she managed: With few outside support systems in place in the U.S. for child and young adult caregivers, the road is a difficult one. “The U.S. is about 20 years behind countries like Australia and the United Kingdom in terms of support and policies for young adult caregivers,” Feylyn says. Whereas the United Kingdom has over 200 supportive organizations for this group of caregivers, there is only one in the U.S. — The American Association of Caregiving Youth (AACY), and “they’re simply not able to reach everyone,” she says.

Most young people don’t choose to be caregivers, but “for the majority, if not all, devotion, duty, love and responsibility to their family unit and elders” motivates them, Feylyn says. She’s found that despite the hardships, child and young caregivers experience a number of positive outcomes on their identify, which is heavily shaped by the caregiving role. These youth tend to be:

The young caregivers Feylyn has worked with “have the ability to handle complex problems. They feel they’ve already come through a catastrophe but they’re not shaken and they see resilience in themselves.”

For Feylyn and her brother, like many other family caregivers, the journey has created close family bonds that are irreplaceable.

Her story: With three girls in their 20’s, Susan and her husband were nicely settled in California. But when Susan’s mom, who lived on the East Coast, became ill with dementia, Susan found herself trying to care for her mom long distance. “It shook me up so badly,” she says. “There is no support for long-distance caregivers, and our family couldn’t move, so we had to find a way to bring her here.”

The process to move her mom to California was difficult, to say the least. First, Susan had to have her mom, who didn’t want to leave her home, removed and placed into a geriatric psych facility while she looked for care in California. “Most places that offered memory care wanted to interview her first, but of course, they couldn’t because she wasn’t here,” Susan says. “Finally I found one place to take her.”

However, in the meantime, her mom had deteriorated to the point that when she did move she wasn’t able to stay in memory care. “She became violent and so ill, she had to go to hospital where she lost her ability to walk,” Susan recalls. It wasn’t until her mom had recovered enough to regain some mobility that she was able to move from the hospital to a senior living community where she experienced a significant recovery before she passed. “With love from the family, she was brought back,” Susan says.

Her challenges: For Susan, the biggest challenge was trying to care and love her mom long distance. “She was so ill, she became a recluse and when we tried to get her to move to us, her answer was always ‘no,'” Susan says. “The system isn’t designed to help caregivers. I ran into a lot of roadblocks when I was trying to help my mom.”

The laws, which are there to protect seniors from unscrupulous children or family members, actually became a hindrance to Susan as she tried to navigate the process of moving her mom to California. “I kept thinking why is this so hard? What am I missing?” she says.

How she’s helping other caregivers: “No one knows about the nonprofit groups that are out there to help,” Susan says. “These nonprofit groups don’t have the money needed to invest in awareness and the marketing they need to reach their audience. There’s a disconnect there.”

It’s this disconnect between caregivers and potential support networks that prompted Susan to develop the Care Better App, a simple-to-use tool that connects people caring for someone with Alzheimer’s or dementia to each other or to experts.

How she managed: Susan’s journey made her realize that people really do look out for each other. “My mother’s mailman changed my life,” she says. “When her mailbox was stuffed he would call and tell me, so I knew something was up. He didn’t have to do that. It wasn’t part of his job, but he did.”

Susan and her family relied on each other, as well as their neighbors. “I remember there was a heat wave and mom’s senior living community lost power. We brought her home to stay with us. My neighbors were there to keep an eye on her when I had to run out on errands. They made sure she was safe.” It’s hard to reach out and ask for help, but Susan encourages all caregivers to lean on their friends, neighbors and community.

Like the Maddux family, Susan’s caregiving journey wasn’t a choice, but “she would have done the same for me,” Susan says. Her family rose to the occasion, and Susan is grateful for the learning opportunities it provided. “My kids saw how families work — that we take care of each other,” Susan says. “I’m grateful that we could bring Mom here with us. She brought such joy to our family while she was here. When she was surrounded by us and cared for she had a second chance. It was a beautiful thing.”

Susan’s caregiving journey also showed her how resilient she is. “When I look back I think, ‘If I did that, I could do anything.'”