Can Vitamin D Reduce the Risk of Parkinson's? 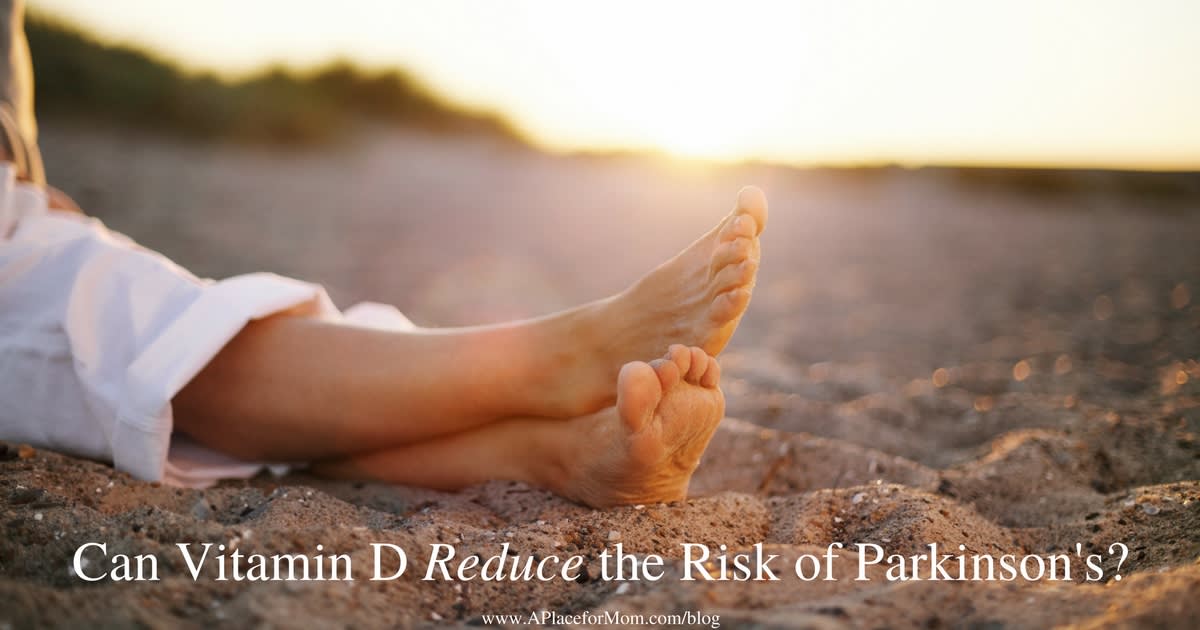 Learn more about how vitamin D can reduce the risk of Parkinson’s.

A vitamin D deficiency can have serious health effects on caregivers and seniors. Getting enough vitamin D through diet, sunlight or supplements can help prevent autoimmune disorders, some cancers, falls and fractures, high blood pressure and Parkinson’s disease (PD). According to the Center of Disease Control (CDC), the risk of developing Parkinson’s increases with age as symptoms usually occur after the age of 50 as the disease is caused by the loss of brain cells in the ‘substantia nigra’ part of the brain that produces the chemical messenger, dopamine. Geriatrician and A Place for Mom expert Leslie Kernisan, MD, comments:

“As the cells die, less dopamine is produced and transported to the striatum, the area of the brain that coordinates movement. Symptoms develop when about 80% of dopamine has been lost. Although more research needs to be done, vitamin D has been linked to help keep the brain cells healthy.”

Vitamin D is produced naturally by the body in response to sunlight. It helps the body absorb calcium, which is critical to bone strength and health. When a person doesn’t have enough vitamin D, there can be serious health consequences.

Strangely enough, milk may contain contaminants linked to developing Parkinson’s disease, according to a study last year. However, vitamin D still helps ward off the crippling disease. Scientists and medical professionals note that for those individuals who have a genetic predisposition for PD — or those who simply want to take preventative measures — consuming more vitamin D could reduce the risk for developing the disease. But how much vitamin D needs to be consumed and what foods contain the best amounts for nutrient absorption?

Read below to uncover more about vitamin D, and how much and what types, of the nutrient people should consume to help ward of neurodegenerative diseases:

How Does Vitamin D Help with Parkinson’s?

Studies show the link between low vitamin D levels and the risk of developing Parkinson’s, relayed by many scientists over the past several years and the National Institute of Health.

An earlier study at Emory University in 2008 showed similar results as more than half of the Parkinson’s patients they studied had low levels of vitamin D.

The Science of Vitamin D

The mechanisms of how vitamin D lowers the risk of Parkinson’s are still being uncovered in clinical trials.

Basically, all cells in the body, including those in the brain, have Vitamin D receptors (VDRs). These receptors are activated by calcitriol, the active form of Vitamin D. When activated, VDRs control the expression of many genes or how genetic material is used. When there is a healthy amount of Vitamin D in the body, the body and cells are better able to function and ward of disease. Vitamin D has also shown to reduce inflammation in the brain as well as help with Calcium absorption.

As the Vitamin D Council explains, without vitamin D, our bodies may lose bone tissue, leading to bone pain, muscle weakness and possible skeletal deformity. We also need vitamin D to do the following:

How Much Vitamin D Should People Take?

Sun exposure, supplements and certain fortified foods are the main sources of vitamin D. Because of the link between sun exposure and skin cancer, the National Institutes of Health (NIH) recommends that adults rely on food and supplements to get the right amount of vitamin D each day.

The amount of the nutrient varies by individual:

A blood test can tell whether you are getting the right amount of vitamin D. Bear in mind that too much vitamin D can have serious health effects.

Seniors should talk to their doctor before taking supplements to determine if they are necessary. This can rule out any potential interactions with prescription medications.

If a person already suffers from PD, he or she already has a lower bone mineral density and is at a greater risk for falls and fractures. This means that those who have the disease need to discuss an appropriate amount of vitamin D consumption for optimal health with their doctors.

The Startling Connection Between Lack of Sunshine and Parkinson’s Disease

Human bodies derive vitamin D from foods rich in the nutrient, like milk and fatty fish, as well as from exposure to sunlight. This means that if we get less vitamin D from sunlight, or if we live in a sun-deprived region of the world, we’re at higher risk.

The journal Neuroepidemiology reported that Parkinson’s rates in the United States were higher in the Midwest and Northeast, implying that there could be a sun exposure connection. However, all researchers agree that there are inconsistencies. For example, one 2011 study conducted out of UCLA found no significant difference in PD incidence in those who had higher lifetime UV exposure levels, while another study the same year suggested that men working outdoors had a lower risk of the disease.

Scientists recognize that more research is necessary to untangle the exact relationship between vitamin D, sun exposure and the development of Parkinson’s disease. However, eating a fortified diet of foods that include vitamin D — and taking a supplement for those who have a genetic predisposition to the disease or may be at greater risk — are steadfast ways to help prevent the disease.

Do you think vitamin D reduces your risk for Parkinson’s disease?  Share your thoughts with us in the comments below.