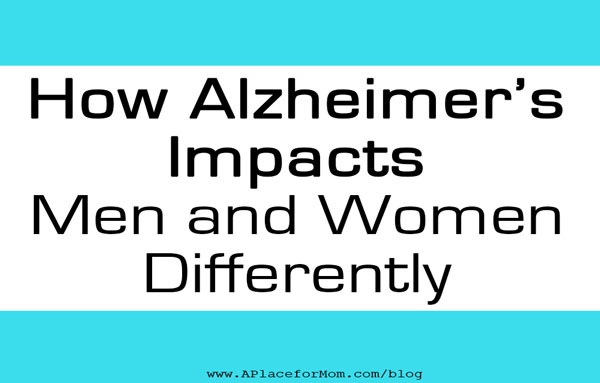 New data by A Place for Mom (APFM) reveals that men are moving to memory care at a rate that is 14% greater than women. Learn more about this new insight and what it means for families.

An overwhelming majority of those suffering from age-related disorders are women, and chief among the disorders is Alzheimer’s disease. The numbers show that women in memory care facilities vastly outnumber men, however, new analysis by APFM according to a recent press release, looks at the increasing prevalence of men in memory care. We also examine how this can impact the experiences of older men in memory care communities and senior living.

It is well-known that women live a few years longer than men on average. Life expectancy after age 65 in the U.S. is now 83 years for females and 78 years for males according to U.S. Census Bureau data. Although it’s not clear why women live longer, experts suggest a combination of factors like genetics and a male propensity for risky behavior (drinking, smoking and fighting, for instance) can drive the difference in life expectancy.

With Alzheimer’s disease being an age related disorder—meaning the longer one lives, the more likely he or she is to develop the disease—it is logical that Alzheimer’s significantly affects more women than men. According to the Alzheimer’s Association, 65% of those living with Alzheimer’s are women, which explains why women are the majority of residents in memory care in addition to senior living communities.

While women continue to be the majority of memory care residents, men are also gradually gaining ground in these communities. An analysis of our senior community move-in data showed that in 2010, 33% of move-ins to memory care communities were male residents, with that number increasing to 35% in 2014.

In a post for APFM’s Senior Living Insider Blog, APFM Analyst Nick White addresses the factors that are contributing to the increasing amount of men in memory care. White’s observations include:

Women tend to live longer than men, but the gap between the two is gradually shrinking. Both genders are living longer, but the male average lifespan is increasing faster than that of women. Male life expectancy increased 6% in the past 25 years, which is twice the rate of women. Experts have pointed to a number of factors driving this trend, including fewer wars, reduced risky behavior like smoking, lower propensity for obesity, and better treatment of gender-specific diseases. Higher life expectancies mean men have a higher likelihood to live long enough to require Alzheimer’s or dementia care. This is a key factor driving the gender difference of memory care populations which explains most of the difference.

When men and women reach out to A Place for Mom, they are not equally likely to display symptoms of memory diseases. Men are 8% more likely to exhibit wandering tendencies and 30% more likely to have issues with combative behavior. Combativeness can force the transition to memory care. Evan DuBro, CEO of Our Family Home, notes that it can be more difficult for wives and daughters to be caregivers to the end. Men are likely to be bigger and stronger than women, in addition to being more likely to exhibit combative behavior. Frequent agitation complicates caregiving and can speed the transition to professional memory care.

A Place for Mom analyzed data in preparation for this story, which interestingly demonstrated that there are proportionally more men at memory care than at assisted living communities.

You could interpret these figures as meaning that men are “graduating” from assisted living to memory care, but it’s also reasonable to suppose that more men resist and refuse assisted living if they can possibly avoid it. Thus, by the time memory care is required, they don’t have the autonomy or ability to avoid receiving care any longer.

Life as a Minority: Men at Alzheimer’s Care and Other Senior Living

Because females tend to dominate the population of seniors — the decor, activities and ambiance of senior communities are often feminine. This can make some senior living environments somewhat uncomfortable for men, unless common areas and activities for men are present (for instance, card rooms and billiards rooms).

It’s easy to imagine a man of any age becoming frustrated with life in an environment where there are no opportunities to express or experience the masculine aspect of themselves, which is why we wrote a blog especially dedicated to finding a community for the men in your life called A Place for Dad: Does Gender Matter in Senior Care? It contains a number of tips and guidelines for those searching for care for a male relative in an industry that largely caters to females.

One challenge for men with Alzheimer’s involves a man’s size and strength. Alzheimer’s disease and the confusion and fear it can evoke on occasion causes those impacted by the disease to act out and even become aggressive. Some people living with Alzheimer’s will yell at, curse at, push, or even strike their caregivers. Some, men in particular, will even act in sexually inappropriate ways that can make caregivers and family members very uncomfortable.

While professionals and family members recognize it’s the disease exhibiting this behavior and that the person impacted has little or no freewill by this stage of their illness, it doesn’t make them any easier to deal with. Both men and women can exhibit these behaviors, but because men tend to be bigger, stronger, and generally more aggressive, these behaviors can be much more difficult to address in men. For this reason, finding care for a man with Alzheimer’s who has behavior problems can be a major challenge.

We’ve established that more women have Alzheimer’s disease but that the illness can cause special challenges for men. Another important point is that women continue to be the vast majority of Alzheimer’s caregivers.

Some might suggest that women are more nurturing and are therefore more inclined to take on these roles, while others may argue that women are merely fulfilling prescribed gender roles rather than drawing from their instincts as natural nurturers. Without getting sucked into a debate about gender equality, we can acknowledge that whatever the cause, women are America’s caregivers, which is not an easy job to take on.

Women Bear the Brunt of the Alzheimer’s Burden

A recent report by the Alzheimer’s Association put it this way: “Women are at the epicenter of the Alzheimer’s epidemic.” The report cited a number of startling facts about Alzheimer’s and its impact on women in the coming decades, including:

A Challenge for All

We also must not forget that while Alzheimer’s affects more women, it is just as hard on men, though, perhaps in a different way. To reiterate, some of the differences in the ways men face Alzheimer’s include:

Alzheimer’s is a brutal disease on both the one living with the disease, and on their loved ones, but increasing our understanding of the illness and the ways it effects both females and males differently has many benefits, including that:

What are your thoughts about the effects of Alzheimer’s on men versus women? Do you have thoughts on how our culture can promote the best care for seniors with memory disorders? Please share in the comments below.