Laugh a Little, Ditch the "Shoulds": Sandra Tsing Loh on Being a Sandwich Generation Caregiver

July is Sandwich Generation Month, and our interview with Sandra Tsing Loh, author of “The Madwoman in the Volvo: My Year of Raging Hormones,” talks about maintaining your sense of humor and other go-to coping strategies for Sandwich Generation caregivers. Learn more. 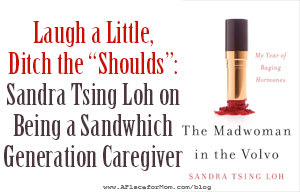 Sandwich Generation caregivers are an extraordinary group of people. It takes energy and devotion to care for an elderly parent while raising or supporting children at the same time. As the vast majority of the Sandwich Generation is aged 40 to 59 — 71%, according to Pew Research Center statistics — this means they also face the additional challenges of middle age, which for women, includes menopause.

“A lot of women I know, they have these amazing superpowers. When they’re on, they can do the work of ten people,” says Sandra Tsing Loh, author of The Madwoman in the Volvo: My Year of Raging Hormones and columnist for The Atlantic. The problem is, “occasionally you hit the bottom of the wave, and you wake up on Saturday morning without the strength to reach over for your reading glasses to read the paper.”

Sound familiar? Loh calls these women the triple-Ms: middle-aged mothers in menopause. “You’re losing your nurturing hormones and you don’t feel like taking care of people any more. But you’re at an age when suddenly you’re caregiving.” Loh has two adolescent girls and a 93-year-old dad, and like other triple-Ms, she’s starting to feel like her multitasking is getting out of hand. She’s not alone: according to Pew Research Center, nearly a third of Sandwich Generation caregivers report that they always feel rushed.

That feeling of the unrelenting “go-go-go” — along with the mood swings and other symptoms of menopause — was Loh’s primary motivation in writing her latest book.

“[Menopause is] a time in a woman’s life when you can have any kind of symptoms,” she says. “Sleeplessness, anxiety, panic attacks, mood swings, bloating, etc. All the books tend to say it’s simple — just avoid alcohol, sugar and caffeine. Drink eight glasses of water a day, take walks, do yoga and eat kale.” For Loh, that advice just wasn’t enough.

“I wanted to write a book about what it’s like to really go through this from a woman’s point of view. The book that I wish I would have had while going through the worst of it.”

That book, released in May, is The Madwoman in the Volvo: My Year of Raging Hormones. Besides chronicling the tribulations of menopause, the book also talks about her experiences as a Sandwich Generation caregiver trying to balance her own well-being with the challenges of raising kids and taking care of an elderly father.

A Conversation with the Author, Sandra Tsing Loh

We talked to Loh about her thoughts on caregiving, from being a Sandwich Generation caregiver to tips on how caregivers can get through the day. Read our interview with her below:

A Place for Mom (APFM): What are the specific challenges of being a Sandwich Generation caregiver in today’s world?

Sandra Tsing Loh: Not only are many women working, they are also parenting their children at a much higher level. We’re working, we’re over-parenting, we’re taking care of our elderly parents who are living longer and we’re trying to keep our marriages sexy and fun. We’re trying to do it all ourselves. It would be mad to think we could take on all of this stuff and not break down eventually… I know plenty of women who devote half their Weight Watchers points to Pinot Grigio. Multitasking, caregiving women will start to blame themselves, even though they’re twirling 50 plates.

APFM: Based on how you reprioritized your own life, what is your advice for mid-life Sandwich Generation women? How can you stay sane when everyone needs you?

STL: Really pay attention to moods that go up and down. Taking things off your plate — doing less — or strengthening the plate — taking hormones or antidepressants for a while. Or just watch it pass, because it will eventually get better.

If you’re taking care of an elderly parent it’s really stressful. It can be like having a child, but tougher… The emergencies will come at any time. You don’t know how long it’s going to go. They’re not going to turn 18 and go to college. It can be sad and full of grief and there are lovely moments.

Caregivers need to really lower the bar — if you can get through even a quarter of the items on the to-do list on a Monday morning, you’re amazing… It’s hard to ask for help sometimes, because you think you failed. You’re blaming yourself. It helps to have a friend you can call and say, “I am terrible, I am crying today, I don’t know what’s wrong with me,” and have a real conversation with them.

APFM: While caring for your father, you ran into a crisis situation. Can you describe what happened?

STL: He was dehydrated. He couldn’t move and he couldn’t get out of bed, and he thought he was dying. He married a much younger Chinese woman who he thought would take care of him, but she ended up with dementia herself.

APFM: Is there anything adult children can do to avoid crises like these? If you had had time to prepare, what would you have done differently?

STL: My dad is now 93. He’s quite irascible. We hope our seniors will be so wise and well-comported and such great grandparents. My dad has Parkinson’s and is in a wheelchair, and about 2-3 years ago, he loved to be wheeled around town and pee on the street and have sex. He was behaving completely inappropriately for a “wise older person.” What I wish is that my father would be a wonderful grandfather, remember his grandchildren’s actual names, but he’s almost like a baby in a diaper, and in a way that’s great. And I don’t have to be the perfect daughter to him, either.

To be honest, with my dad, there was nothing I could do to stop these things from happening, because he was so independent…You do the best you can, but at a certain point I realized I had to let him go. Caregivers tend to be very concerned, very responsible, in trying to make sure nothing bad happens.

APFM: How are you approaching your own long-term care plans?

STL: I wouldn’t want to saddle my children with this overwhelming expense. Depending on how this goes, hopefully I would be sentient enough that I would find a way, perhaps live in a house with other people around. I’m wondering if, for my generation, when we get up there, there’ll be a different, more groovy kind of venue.

APFM: What do you think we gain by dealing with these turbulent life transitions — adolescence, menopause, advanced old age all at once?

STL: Menopause is when the estrogen cloud lifts and we question the wisdom of trying to do all these things at once. We’re caregiving all these people, we’re having all these hormonal fluctuations that make us really question why we’re doing it, and question the madness of the 12 different hats that we’re wearing as women.

APFM: You’ve talked about the importance of sleep for caregivers. How do you feel reading books and writing are good pre-bedtime routines to help caregivers sleep better?

STL: For caregivers now, it’s such a new phenomenon of how long our parents live. In the last 50 years, people have been a lot more mobile and spread out. Managing elder care is quite complex. Managing the financial pieces and the healthcare is a very complex set of circumstances… You kind of slowly have to take over more and more of this stuff. If you’re lying awake, it’s hard for your brain to shut down.

Sometimes women social network at night or binge-watch Netflix, but having a lot of devices on in the bedroom leads to poor sleep. I have found that I’ve changed my evening ritual. Instead of doing the Facebooking or the binge-watching of Breaking Bad, I’m running a bath, making chamomile tea and reading a book. I found that really very calming and soothing, and I found that even my thought patterns began to slow down. When you relax at the end of the day, try a book. It doesn’t have to be my book. I’d prefer it if it’s my book. Take a break. Have a laugh. Take a load off. Let the kids eat rice and mashed potatoes for dinner.

APFM: What would you change in our culture to make these situations less stressful and less full of stigma?

STL: We’re starting to slowly think of menopause in a different way. Instead of the idea of women losing their worth and becoming irrelevant… women can hit menopause and almost have half their lives still ahead of them. Even though it’s kind of a youth-oriented culture, women in their 50s and older are starting to report themselves as happier than when they were in their 20s and 30s and 40s. Women’s hormone levels literally return to where they were when they were a preteen girl. It’s like you have yourself back. I think that will make a difference.

I think we’re still learning things about menopause, because people don’t really talk about it that much. We’re reframing the whole discussion now about menopause. If we were more realistic about how difficult it is, or more honestly among ourselves… Women have a very large spectrum of what they think and what they feel and what they do, and we can have a more honest conversation, laughing and having a sense of humor about it.

[Regarding] the emotional complexity of dealing with an elder parent — you’re trying to relive the past or fix the past, and you’re working and working and no one really sees the effort you’re putting in. People don’t appreciate it as much as the mommy track because there’s no cute baby there. I salute those who are doing this. We’re all in this together.

What words of advice or appreciation would you give to fellow caregivers in the Sandwich Generation? Share your thoughts in the comments below.