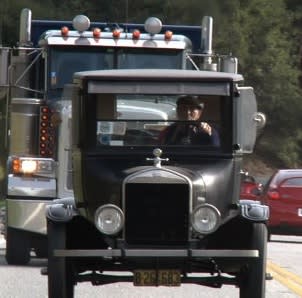 The documentary “Old People Driving” is a memorable and touching look at the issue of senior drivers. The film approaches the topic in a balanced way that looks at both the perspective of the older drivers, as well the critical public safety concerns.

Driving and the American Dream

The film’s opening titles begin with a photo montage that shows how Americans of Herbert and Milton’s generation came of age just as American car culture was reaching its peak. We see that owning a car is a vital part of the ethos of the American dream.

We first meet Milton who tells us he has been driving for 87 years. He owns several antique cars, including the Model T Ford which graces the film’s artwork. Milton wryly tells us, “I’ve been driving for about 89 years. I think I’m beginning to learn how to do it now.”

Milton is still confident in his driving skills, saying, that he resents it when his passengers assume that he can’t drive well merely due to the number of times he has circled the sun: “…Due to my age, they’re a little bit apprehensive about my driving. They keep directing me which way to go: ‘This way. That way. Turn here. Look out for that light there.’ I know all these things. I’m driving. I see them. Nobody has to tell me about them. When they do that, I figure they figure I can’t figure out there’s a stoplight ahead of me or something. When that comes to be, I’m not driving anymore.”

Milton strikes us as a balanced and reasonable man rather than a geezer stubbornly clutching his keys. We can empathize with Milton. Who’s to say I can’t drive anymore?

But Haas reminds us, that we do have some reason to be concerned about older drivers. There are very real risks. Older drivers (85+) are involved in 3 fatal traffic accidents each day according to data from the National Highway Traffic Safety Administration. Only teenagers are have a higher rate of motor vehicle accidents than seniors. The film revisits a tragic incident that occurred in 2003 when an elderly driver barreled through a crowded farmer’s market in Santa Monica, killing 10 and injuring more than 60. This incident brought the issue of elderly drivers to the forefront of the national consciousness, and prompted many states to enact legislation that places more oversight on older drivers.

After meeting Milton, we’re introduced to Herbert Bauer, who is 3 years Milton’s senior. Herbert is an affable character, clearly an optimist. He realizes his driving days are over but takes it all in stride. He says, “I have driven a car for about 80 years, and it’s about time to change before somebody invites me to change. I have been driving without an accident for so long, and I wouldn’t want to spoil my record. So I’ll try something else for a while.”

We actually ride with Herbert on his final drive, and it’s clear it’s probably for the best. He very nearly collides with a taxi at an uncontrolled intersection.

We learn that the “something else” Herbert is referring to is a tricycle. Unfortunately, the tricycle doesn’t work out for him. We watch as Herbert awkwardly attempts to propel his tricycle, and it becomes clear very quickly that the trike is not going to work out for Herbert. “It doesn’t go,” he says resignedly. Despite being very fit for his age, a hip problem makes pedaling impossible.

The filmmaker’s choice to focus on two older men is not accidental. Men, Haas tells us in her narration, can be especially reluctant to give up the independence that they associate with the automobile. She says, “My grandmother stopped driving years ago. Like many older women, she gave up the keys without much of a fight. But for men, it’s a different story. For men, the car is a measure of their identity in life, perhaps even their virility.”

At one point in the film, Milton, who is committed to driving until he turns 100, talks about how he equates the end of driving with the end of life itself: “To me that [not driving] would be sitting there waiting to die, and I don’t want to do that.”

The film concludes with poignant words from the ever stoic Herbert. He acknowledges he probably won’t be transitioning from a car to a tricycle, but he takes the disappointment well:

“We’ll see what happens next, but at the moment I am fairly stationary. Not to be able to leave your house whenever you feel like it, of course, is a difficult thing to adjust to. But your choices are very simple. I mean, either become mad at yourself and say, ‘I should be able to do that.’ Or, again, you say, ‘Well — another one of those. Tricycle, no tricycle. Who cares?’ I am telling myself that giving up such relative trivialities as driving is nothing compared to, for instance, giving up a person that you have loved all your life. And when I think of my wife’s death such things as giving up driving are relatively and literally nothing. For me, it’s the only possible outlook. Take as much as you can. Do what you can to enjoy life. And if you have to be by yourself, tell yourself you’re in good company.”

One wonders whether it’s this admirable attitude that helped him live well for so long.

A Film About the End of the Road

The tagline of Old People Driving — “a film about the end of the road” — is evocative of an underlying but unsaid theme of the film — that giving up driving is a microcosm of coming to terms with mortality. Indeed, Milton compares the day that he’ll one day stop driving it a small death in itself.

The film could be insightful for families with an older driver, as well for professionals working with such seniors. It turns the conversation away from stereotypes about crashing codgers, and powerfully humanizes the older drivers in a way that’s remarkable for a short film. Although “Old People Driving” may be of special interest to those somehow involved with seniors, it was an enjoyable movie in its own right. It’s charming without being sappy and succeeded because the presence of two very interesting and likable characters.

An Update About “Old People Driving”

Bauer, who escaped the Holocaust in World War II, was such a remarkable person that his passing was noted in a lengthy obituary on front page of his local newspaper in Davis, California.

You can view the trailer for Old People driving here and it can be purchased here.