Can Lack of Sleep Lead to Alzheimer's? 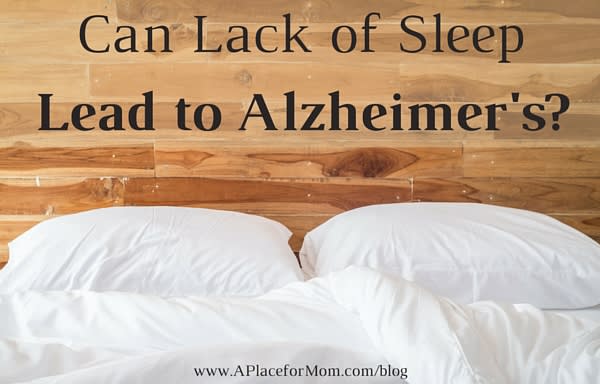 National Sleep Awareness Week is March 2-8, 2015. While sleep is something many of us put off to get things done, losing sleep can have long-term effects on our health. In fact, recent studies have linked ongoing lack of sleep to Alzheimer’s disease. Learn more.

As we approach Daylight Saving Time (DST), we face the inevitable loss of an hour of sleep. But, that hour may be just one out of many over the course of a lifetime, and those accumulated hours of lost sleep can lead to serious health problems, including Alzheimer’s.

Meir H. Kryger, MD, National Sleep Foundation Board Member and professor of medicine at Yale Pulmonary and Critical Care Medicine, stresses the negative consequences of sleepiness at the wrong time and place.

“Some people may have a sleep disorder that is worsening their overall health and quality of life. National Sleep Awareness Week is an outreach to the population to think about their sleep and address any sleep issues they may have.”

The National Sleep Foundation (NSF) details how much sleep we need each day based on our age group. Infants and toddlers need the most, followed by preschoolers and school-age children. Not until we reach our teens do our sleep needs fall to under 10 hours a night. It is recommended that adults 18 and over get seven to nine hours of sleep.

When we fail to get the sleep we need, it creates a sleep debt that impacts our alertness. Even if we get the right amount of sleep a couple of nights a week, we still may carry a sleep debt that can be hard to make up for, if too much accumulates. That is why it is important to create good sleep habits, which lead to optimal physical and mental performance.

Impacts of Sleep Debt on Health

Dr. Kryger emphasizes that people who do not get enough sleep may suffer mood and health consequences, including:

Additionally, Dr. Kryger cites studies on how shift workers, “whose body clocks are misaligned with those around them” may be at risk of developing cancer. According to Medical News Today, researchers have linked long-term exposure to artificial lighting as a potential culprit for breast cancer in women who worked the night shift for several decades. The artificial lighting suppresses the body’s production of melatonin, which, in turn, can increase estrogen production, a trigger for breast cancer in some women.

Benefits of a Good Night’s Sleep

Getting the right amount of sleep leaves us feeling refreshed and ready to take on new challenges.

“Many people try to cheat on the amount of sleep they get, thinking they can get away with less,” says Dr. Kryger. “It’s important for people to understand they can’t get away with it.”

The NSF describes the many benefits of sleep, such as:

One more benefit? A lower risk for Alzheimer’s.

Having Alzheimer’s has already been associated with poor sleep. People with early stage Alzheimer’s may sleep more than usual or wake up disoriented. As the disease progresses, it can cause frequent daytime sleeping and more nighttime waking. Some people with Alzheimer’s suffer from sundowner’s syndrome, a period of increased agitation, confusion or even memory loss in the late afternoon and early evenings.

These disrupted sleep patterns build stress and anxiety for people with Alzheimer’s as well as their caregivers. As Dr. Kryger indicates, “The most common reason for the institutionalization of patients with dementia is that their caregivers have trouble handling their nocturnal wandering, nocturnal confusion and other sleep problems.”

When caregivers do not get enough sleep, it impacts their own health, mood and their ability to be productive.

“Caregivers need to recognize that their own sleep is important,” says Dr. Kryger, “and they shouldn’t be shy about asking for respite — either from family or temporary care providers.”

At Washington University in St. Louis, researchers found that losing sleep can promote the buildup of brain plaques that lead to Alzheimer’s disease, suggesting that sleep loss works both ways. That is, Alzheimer’s causes sleep loss, and long-term lack of sleep leads to symptoms of Alzheimer’s.

5 Tips on How to Get Better Sleep

“The most important tip I can give anybody is to make sleep a priority,” says Dr. Kryger. “Many people know what they should be doing, but they never take steps to address issues with sleep.” As part of its Sleep Awareness Week 2014, the National Sleep Foundation offers these tips for getting a better night’s sleep:

Try these habits for a few days and nights, and observe how much better you feel. The difference in getting enough sleep over just a few days could be eye-opening. Hopefully, it will inspire you to keep up good sleep habits for the long-term.

How have sleep habits changed for your loved one with Alzheimer’s? What steps have you taken to improve your own sleep? Share your story in the comments below.