8 Facts About Men and Aging 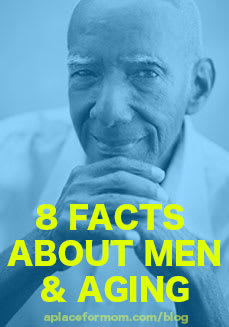 Father’s Day will be here soon, and it has us thinking about concerns that uniquely affect our fathers and other senior male relatives.

Learn more about issues that affect aging males in these 8 facts about men and aging.

Facts About Men and Aging

We first addressed men and aging concerns in the post, “A Place for Dad: Does Gender Matter in Senior Care?,” which featured tips about how to approach difficult conversations about senior care with an older man and also how to find a community where a man will feel comfortable and at home.

In this post, we look at other issues affecting aging males, from their surprisingly common role as caregivers to their experiences as a minority at senior communities.

Here are eight facts about the ways men experience aging and senior care:

The difference in life expectancy between men and women is well known.

According to the World Health Organization, American women live five years longer than men. Historically, the gap was even larger. The relative paucity of elderly men was vividly illustrated recently in New Jersey at the world’s largest gathering of centenarians: only 2 of the 40 participating centenarians were men.

Scientists have been pondering the discrepancy in life expectancy between the sexes for decades. One reason men live shorter lives, experts say, is because they have a propensity to high-risk behaviors such as alcohol abuse, smoking, driving recklessly and going to war. Some of the latest research indicates differences in the male immune system may be a big part of the reason men live shorter lives, too.

Another important factor is heart disease. Heart disease is a major concern for men and women, but men are more likely to succumb to a heart attack earlier in life than are women. Andrew Kimbrell, author of “The Masculine Mystique,” notes: “Though heart attacks are also the number one killer of women, almost three-quarters of women who die of heart attacks are 75 years or older. By this time the average man has been dead for almost two years.”

2. Only 1-in-7 Assisted Living Residents are Men

According to the Assisted Living Federation of America, less than 15% of assisted living residents are men. This is largely due to the life expectancy differences we just discussed. The fact that men are a small minority of senior community residents sometimes means that senior communities don’t always appeal to masculine tastes.

Author, Pam Gerhardt, recently wrote an essay describing the challenge she faced as she was trying to find an assisted living facility for her father: “Every place I visited, I was overwhelmed by potpourri and teddy bears with bows. A typical day’s activity? ‘Manicure afternoons.'”

While it’s true that the ambiance and decor assisted living communities tends on the more feminine side of the spectrum, most senior communities provide activities, outings and common areas that appeal to traditionally male tastes. For example, the Garden Park Villas in Escondido, California, has a card room and a weekly poker tournament. There is also a barber shop, bocce ball, bowling, and outings to San Diego Padre’s games.

During a visit to my grandmother’s senior community in Gig Harbor, Washington, she introduced me to Cecil, age 76. I asked him about what it’s like to be in the minority at a senior community. He started out with a joke, “It’s like that Beach Boys song, Surf City,” he says, before singing out “…two girls for every boy.” After a moment, he became more serious and told me that he doesn’t mind that there aren’t a lot of men at the community. He says that although there aren’t many men who are residents, the ones who are there have formed a close, tight-knit group. Cecil says he never has trouble finding someone to play billiards or cribbage with, “I like to shoot billiards and play the odd game of cribbage. There’s always a sparring partner around.”

3. Older Men Report That They are Happier Than Older Women

Popular wisdom holds men have a harder time with aging than women. For example, a 1996 article in Geriatric Nursing said, “…Research has shown that men generally have a harder time in adjusting to the changes [of aging]. Conditioned throughout their lives to be strong, controlling, and independent, men can be devastated by the losses that are associated with aging.”

Despite the subjective impression that men have a harder time with aging, older men are significantly more likely to indicate that they have happy lives than older women. A University of Michigan study found that 25% of older men reported being “very happy” compared to 20% of older women. Interestingly, it was women who were happier in younger age groups: “The relationship between gender and well-being reverses itself over time, moving from a female advantage of four points to a deficit of five points.”

4. Men are Less Apprehensive About Aging

A study by researchers at Florida State University (FSU) found that men are less apprehensive about growing old than women. In the study, male and female college students were asked about their feelings regarding aging. Females expressed considerably more anxiety and fear about aging than their male counterparts. Students were also asked draw the face of an older person, and women students were much more likely to include wrinkles in their drawing than male participants.

While men may be less fearful of growing old, apprehension certainly still exists. A study by the American Geriatrics Society asked men what they feared most about aging. Men’s top fears about aging included:

5. Men are Perceived to Be “Old” at a Later Age Than Women

The same FSU study found that “both men and women reported lower ages at which women are considered to be old, compared to men.” For better or worse, a 65-year-old woman might be considered “old” while a 65 year old man may not. Similarly, a study in the Journal of Applied Social Psychology found that older men are considered more attractive than older women: “Although both men and women were perceived to diminish in attractiveness as they aged, the decline for women was greater. Moreover, ratings of women’s femininity decreased with increasing age, whereas evaluations of men’s masculinity were unaffected by age.” Feminist thinker and author, Susan Sontag, coined the phrase “double standard of aging” when she described this phenomenon in a 1979 essay.

Because there are more elderly women than elderly men, there are more women than men with Alzheimer’s disease and other kinds of dementia. But when researchers at Esasmus Medical Center looked at the rate of Alzheimer’s as opposed to the number of patients, they saw that men and women have an approximately equal risk of developing the disease. On the other hand, they did find men have a notably higher incidence of vascular dementia than their female counterparts. Another study noted that brain atrophy, which is a common consequence of many age related ailments, is more pronounced in men than women.

7. Older Men are Satisfied With Their Sex Lives

While discussions about the love lives of seniors can be a bit taboo, sexual intimacy is often described as a core human need. In a study that surveyed more than 2,800 men over 75, about half said that sex was “at least somewhat important” to their lives, and one third of the men were sexually active. Another study found that 74% of sexually active men over age 60 said that they are equally or even more satisfied with their sex lives than during their 40s.

8. More Men Than Ever are Caregivers

According to the Alzheimer’s Association, in 1997 just 19% of family caregivers were men while in 2012 that number is 40%. Researchers and advocates for seniors and caregivers are beginning to pay more attention to the increasing number of men who are caregivers. For example, niche websites for caregiving men, such as MaleCaregiverCommunity.com, have sprouted online.

Males face special challenges as caregivers. According to the National Alliance for Caregiving, men are more likely than women to feel unprepared when they take on their role, and are less likely to ask for help than women. A separate study published in the journal Research on Aging looked at factors associated with the husband’s ability (or inability) to care for an ailing wife in the long-term. The researchers found men’s ability to care for their wives at home was dependent on a number of variables, including how much the caregiving role impacts the husband’s other activities, and the prior relationship between husband and wife.

What facts about men and aging were most surprising to you? Did you know that only 1-in-7 assisted living residents are men? Share your thoughts with us in the comments below.