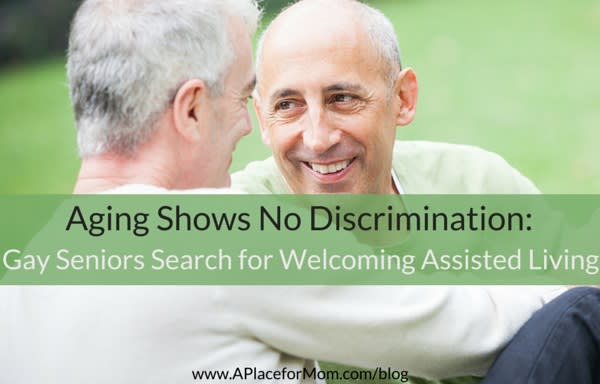 The first generations to live openly gay are aging and are now seeking assisted living and retirement housing options. Because of discrimination, a new, successful senior housing niche has begun to develop.

This June, in honor of LGBT Pride Month and the Supreme Court ruling in favor of same-sex marriage nationwide, we are learning more about gay seniors who are searching for welcoming assisted living.

Despite this being the 21st century, gays and lesbians are still experiencing discrimination in many parts of the country — and at all ages. Gay people also grow old — this is not a difficult concept to understand — yet many assisted living communities are not accommodating.

According to Chris Lehman on NPR:

“As lesbian, gay, bisexual and transgender people age, finding suitable retirement housing can be a unique challenge. Some facilities allow only married couples to live together, and many gay seniors fear a cold shoulder from staff or fellow retirees.”

So what’s the solution? Well some retirement homes have begun catering specifically to lesbian, gay, bisexual and transgender (LGBT) seniors. Graying and gay has become a niche as accommodating senior living solutions are necessary.

Fountaingrove Lodge in Santa Rosa, a retirement community built in Sonoma County’s wine country is one such community. Because of the success of filling this LGBT community, more communities are in the works. According to Oakmont Signature Living, the nationally recognized leader in the development and construction of high-end senior communities, “The next phase of construction on the $50 million, 10-acre project starts this spring, and up to 140 residents are expected to move into 70 apartments and bungalows next year. Because of its combination of independent living and continuing care, including assistance for those with failing memories, it is being promoted as the first of its kind in the nation for gay men and lesbians.”

This LGBT senior housing option is coming at just the right time as the first generations to live openly gay are now older and seeking senior living options. Elderly gays, lesbians and transgender people are routinely denied housing, despite the public awareness of the problem — to the point that many gays, lesbians and transgender individuals pose as heterosexuals just so they can find a retirement option.

According to Services and Advocacy for G.L.B.T Elders, a group based in New York known as SAGE, “L.G.B.T. elders often face discrimination when buying or renting a home and may be denied housing, including residency in mainstream retirement communities,” the group said in a November 2011 report.”

Find out more about the challenges seniors face in nursing homes and assisted living by watching the video below:

What challenges have you faced in your search for assisted living? Share your story with us in the comments below.