Centenarians in the U.S. 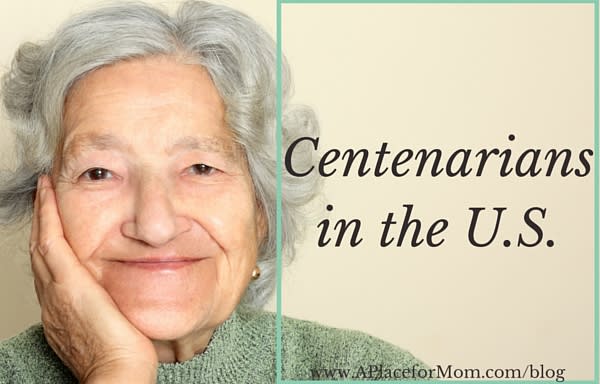 A report from the U.S. Census Bureau reveals a 66% increase in the number of 100-year-old Americans. Which Americans are living to be centenarians? If you’re a Caucasian woman living in the Midwest or Northeast, your odds of living to 100 are more favorable.

Learn more about centenarians in the U.S.

A Portrait of Centenarians in the U.S.

The total was reported to be 53,364 centenarians on the 2010 Census with the majority of centenarians identifying themselves as Caucasian women.

The Centenarian Study, a long-term study conducted by the University of Georgia, found that “20-25% of centenarians are community-dwelling, cognitively intact and generally vibrant and full of life” — however, more than half of centenarians have some form of dementia, and 60-70% are disabled.

Quality of life, therefore, varies widely for our oldest seniors.

Where Are Centenarians in the U.S.?

The geographic distribution of U.S. centenarians reveals some interesting trends.

California was the state with the highest number of centenarians — 5,921 — while Alaska had the fewest — just 40.

What We Can Learn From Centenarians

Centenarian studies are critical to our understanding and improvement of the quality of life for seniors as they age. Not only that, we can learn a lot about healthy aging and perhaps even prolong life expectancy by figuring out how these seniors have lived so long.

When centenarians are asked how to live a long life, having an optimistic attitude is one piece of advice usually at the top of their lists.

Do you know a centenarian? What have you learned from the centenarian population? Share your thoughts with us in the comments below.