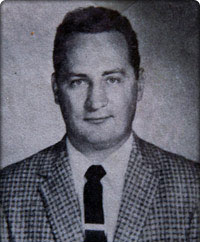 The Summit at Lakeway Brookdale Senior Living Community is a pet friendly community that welcomes furry friends as companions for their senior citizens. One of their residents, Ed Volick, came to their community with his cat, Scooter. Ed walks his cat on a leash every day and brings smiles to those who watch.

Learn more about this interesting gentleman by reading his story below…

Ed was born to Polish immigrant parents on January 24th, 1921, in Windsor Ontario.

He was the youngest of 4 children with 3 older sisters. Mary, Vicki and Stella. Mary is his only surviving sister at 96 and the oldest of the 4 siblings and resides in Leamington, Ontario, Canada.

Ed was an ambitious son with big hopes from his family to succeed in the new world. Ed excelled in high school and got very good grades. He played Hockey, football, basketball, track and basketball in high school, lettering in all sports. He also was very active in youth groups and the Catholic Church. He was active and president of the Polish youth group and young businessmen of Windsor.

Ed graduated from high school and went to Detroit Institute of Technology on an Academic Scholarship. He majored in Mechanical Engineering. Shortly after graduation, Ed was drafted into The Royal Canadian Air Force to confront the Germans during World War II. Ed became a flight engineer and shortly after his induction into the service the war ended before he saw active duty.

After he was discharged from the Royal Canadian Air Force, Ed started his own die-casting company that made parts for GM, Chrysler and Ford Motors in Detroit. He had a very successful business for many years. He met his wife Ludmilla Demetrinko at his firm, who was a Russian Immigrant blond bombshell, who snagged the company president.

After their marriage in 1952, Ed sold his company and moved to sunny Southern California with their son Thomas, to pursue a career in Aerospace. Edward had an illustrious career working on the Space program in the 1960s and 1970 throughout the Gemini, Apollo, and Shuttle NASA programs. He worked with worked with the captain and astronauts of each Apollo flight from Apollo 7 through Apollo 13.

Ed and family moved to Houston, Texas in 1971, to work on the Shuttle program with Boeing after the Apollo program finished. He worked on mechanical issues with the Shuttle in addition to working on the Shuttle Flight Simulator in Clear Lake, Texas.  Ed retired as a NASA subcontractor in 1985. He invested in Real Estate and consulted as a Professional Engineer until he had a stroke in 2006.  After several months of rehab  he relocated to Lakeway, Texas to be near his son and daughter-in-law. Ed has resided at the Summit since the fall of 2006 with his cat, Scooter.