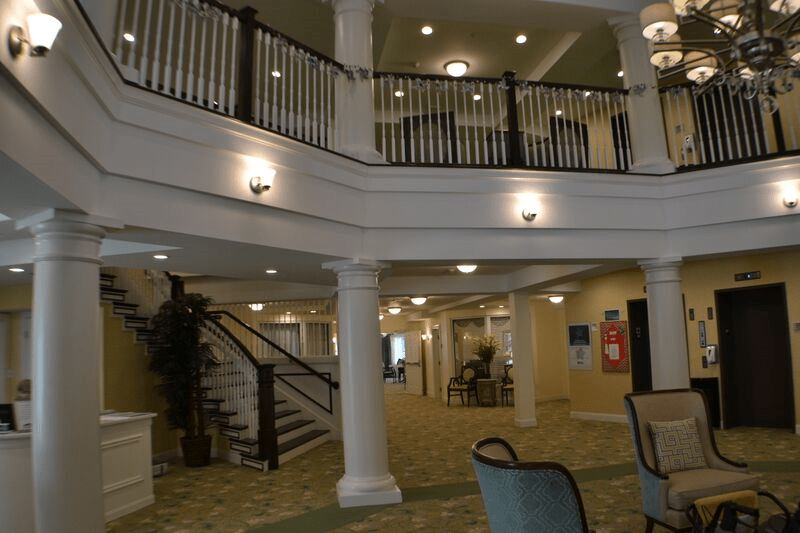 Linda Manor Assisted Living is an assisted living community, located in the quiet, historic village of Leeds, MA. This modern community is situated in a wooded setting, near transportation for shopping and appointments. Leeds, a part of the City of Northampton, MA, is nestled in the Berkshire Mountains and offers a wealth of cultural activities, including live theater performances at nearby Smith College and a summer jazz festival.

The staff at Linda Manor Assisted Living is dedicated to providing residents with a good quality of life while meeting their individual needs in a secure and beautiful home atmosphere. Our caring and well-trained professionals are available 24/7 to help keep residents comfortable, happy and secure, both night and day.

In addition to attending to the medical and physical needs of our residents, Linda Manor Assisted Living offers an active and vibrant community that encourages residents to make new friends and take advantage of the wide range of amenities, such as:

At Linda Manor Assisted Living, we are proud of the community we've created. We invite you...

a great place for a loved one

The people there are wonderful. They make this place what it is wonderful. The only issue is they do have a repetitive menu but the food was excellent. I would recommend this community to others.

A great place for mom

We chose this community because we thought the staff were very friendly and professional. We also liked the look of the place. The LEP program was for people with Alzheimer's and dementia. The room sizes were very good, plenty of room. She always said the food was very good. My favorite part about this community is that they seemed to really care about my mother in law. I would definitely recommend.

Linda Manor would have had my recommendation until this past weekend. Staff is friendly, the place is spotless. But In late July 2020, events played out in such a way that was unforgivable and put my 90yo mother at great risk. Linda Manor has been appropriately testing staff, and occasionally residents as needed. Recently a staff member tested positive, and we were told that staff person was isolating at home, and they were going to conduct a round of testing of residents. Well my mothers test came back positive on Saturday. I was informed that she was being transported to Cooley Dickinson by ambulance even though she had NO symptoms that met state guidelines. Later, talking with the hospital I found out she couldn’t be admitted because she had no symptoms, and they said LM knew she couldn’t be admitted and we wondered, did they ship her there just to protect their statistics? Cooley Dickinson recommended she return to her home to isolate there. Linda Manor’s director said she would not be allowed to return home and replied she would have to be sent to Skilled Nursing facility affiliated with Linda Manor in DANBURY CT, hours from me or my family, in a unit for critical covid patients. Linda Manor would not allow her to return to her home to isolate there! MIND, Mom had no symptoms, just a single swab. According to friends and staff at other facilities, state guidelines say assisted living residents should shelter in place, even if they were symptomatic, unless they seriously needed additional medical services that could only be provided at a hospital. Linda Manor PUNTED a 90 yo with cognitive difficulties, diabetes and other underlying conditions to a hospital that could not admit her! I personally think they panicked and had no policy in place for how to deal with the situation, forgivable in February or March, but not at the end of July 2020! So with no preparation, no PPE, no medications, no grab bars, no walker, I was forced to take mom to my apartment. I would never send her to a SNIF without need, but I was ill prepared to deal with a possibly covid elder with mobility and cognitive difficulties, especially since I was in the middle of moving my household. I had to ask for her medications and insulin to be sent to me...and then the insulin was sent without the needles, which we didn’t get til the following day! Her doctor suggested retesting immediately and Mom’s second swab came back negative. Later in the week a 3rd swab came back negative as well. It looks like Linda Manor dismissed a paying (and they ain’t CHEAP!) elder resident after a false positive test, upending her life (as well as her families) in a incompetent, unforgivable way. And the place they would have sent if I hadn’t been able to jump in, was a ward with positive Covid patients where she would have surely been exposed to the virus. In addition they failed to notify all the families of other folks in the facilities....In fact they failed to notify me of it (I just happened to have the inside scoop since it was my mom.)

How do other families rate Linda Manor Assisted Living?

Linda Manor Assisted Living has received an average review rating of 3.73 based on 9 reviews. See all reviews.

The Arbors at Amherst

The Arbors at Chicopee

The Arbors at Westfield

The Arbors at Greenfield