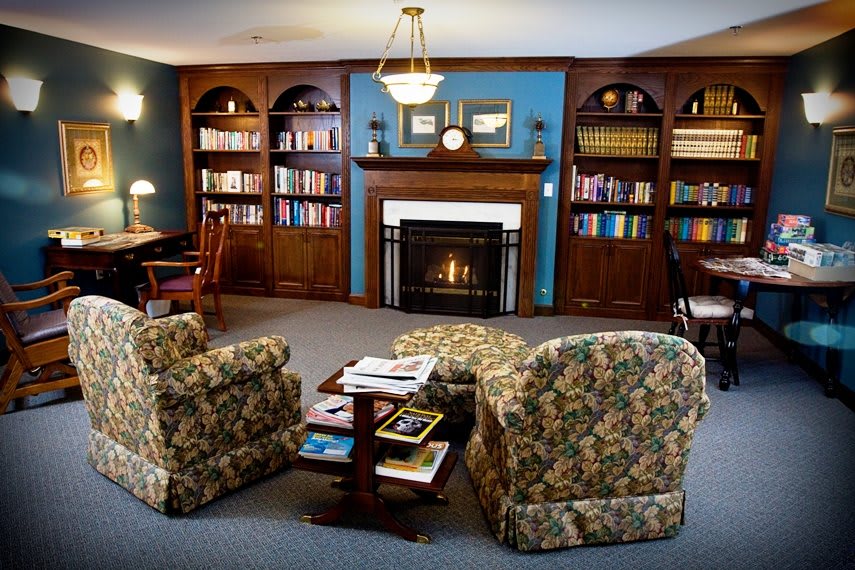 Quail Summit is an upscale senior independent and assisted living apartment community with three different facilities located in one building in Canandaigua, New York. The three facilities are divided differently according to the flooring plans and specialized services. The Estates are for people who wish to live completely independently. Continental breakfast and one meal a day (dinner), maid service, utilities, cable, 24 hour staff and access to all of the common areas is included in their rent. The Harbor is for people who can manage living semi-independently but may need light assistance and support of some daily activities. The Village specializes in helping people with beginning to advanced stages of dementia and Alzheimer's who may need gentle guidance and assistance with medical administration. Quail Summit provides ample entertainment that is suitable for outdoor and indoor activities. Some of the amenities include card games, hiking trails, a full library, pleasant common sitting areas, exercise and fitness and computer access. Families and friends can feel welcome by enjoying the many guest services and accommodations when visiting. Additional housekeeping and maintenance, catering, room service, guest meals and covered parking is provided for guests. They also offers short term boarding called 'Graceful Stays' which...

Unacceptable Care in the Memory Unit

My father has Alzheimer’s and was admitted based on a PRI assessment into the Memory Care Unit of Quail Summit. As you can read on the Quail Summit story they claim to offer a loving and safe environment with those suffering from memory loss. Don’t believe it. There have been many daily challenges with Quail Summit, bed not made, clothes not laundered, clothes lost and replaced with someone else’s clothing are just the very minor challenges. They do not keep a consistent schedule for giving meds to your loved ones, they do not have nursing staff available to give meds more than twice a day, they don’t understand or deal well with anxiety issues associated with Alzheimer’s. Quail Summit,, due to Administration/Management issues are unable to keep staff so they have a revolving door of untrained newbies that are not properly equipped to care for your loved ones in a memory care unit. Last night we received a message to call Quail Summit. When called the first response was that our Father was fine, the second conversation was that he had been taken by ambulance to the Hospital. When my Dad doesn’t receive his anti anxiety medicine he repeatedly says that he wants to commit suicide. With his meds and a little attention he works himself out of this anxiety. This is just one of the routine things of his memory loss. Anyone working with h8m would know this. Evidently there was a new staff member that did not know how to deal with this. What we eventually fo7nd out was that Quail Summit had called the police (on a dementia patient!) . The police transported him to the Clifton Springs psych ward, unbeknownst to us and was left there, UNATTENDED, this man is a gentle soul without an aggressive bone in his body. He has never broken a rule in his life. We found him in a hallway, unattended, with a patient gown and no shoes. He had been sitting there by himself for a few hours. Did I say UNATTENDED? He didn’t know where he was, why he was there or what he should do. He was terrified! The hospital ended up giving him anti anxiety meds and sending him off with my sister, after three hours. Something that Quail Summit should have done. Today when the matter was discussed with [name removed], the Administrator of Quail Summit she admitted that it may have been handled wrong but proceeded to state that she wanted Dad removed immediately. She then removed all cords from his room, lamps, radio, clock,etc...are you kidding me!!!! Due to their inability to talk an Alzheimer’s patient thru their anxiety they have taken away basic rights! we will definitely be removing Dad as soon as possible. If you care about your loved one p,ease don’t be fooled by the clean, friendly exterior. The level of care in the memory unit is unacceptable!

Doctor
Nurse
Podiatrist
Physical therapist
Ask an A Place for Mom advisor at no cost.

How do other families rate Quail Summit?

Quail Summit has received an average review rating of 3.64 based on 1 reviews. See all reviews.