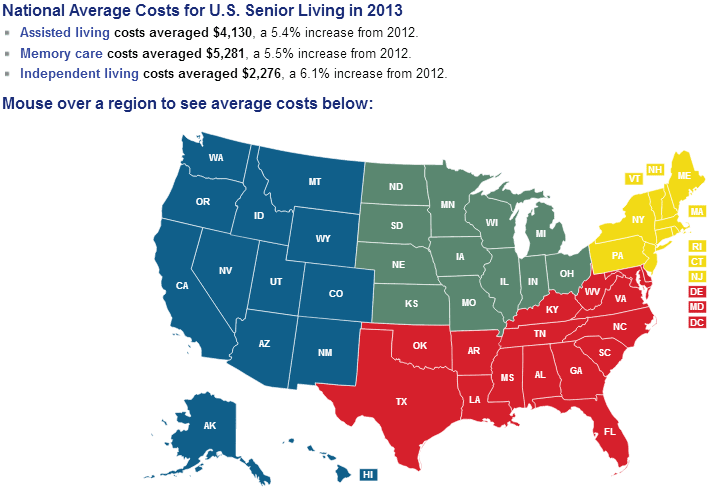 A Place for Mom’s 2013 National Senior Living Price Index is based on an analysis of prices families and seniors paid for senior housing dating back to 2010. The report covers three separate care types: independent living, assisted living and memory care. The analysis provides insight into national and regional trends, while also providing a benchmark for future comparison.

The National Senior Living Price Index is unique in that it is based on tens of thousands of records of actual transactions between consumers and senior living communities rather than self-reported prices. There are many factors that influence monthly fees, including required care services, room type, amenities, and pricing specials, therefore the actual costs consumers pay can vary significantly from an advertised price or “street” price. Analyzing actual transaction data presents a more accurate look at industry pricing.

Additionally, the Senior Living Price Index tracks memory care prices, which, to our knowledge, is not available in other industry pricing reports.  Memory care is an increasingly important facet of the senior living space that warrants being analyzed separately from other care types.

Our analysis of four years of historic data provides a good snapshot of national and regional trends.  Looking at the most recent transactions, we found the 2012-2013 national average prices and rates of increase are:

The Great Recession required providers to greatly reduce prices in order maintain occupancy, and the recovery has allowed them to bring prices back to a more sustainable level, which is evident in our index. Our index is largely a snapshot of a recovering economy.

Assisted living prices increased 7.8% over 2011 as prices returned to normal from artificial lows, but in the subsequent two years they increased at an average rate just under 5.0%. The graph at right illustrates moderating price growth for memory care, which is most likely driven by the increasing number of providers that cater to seniors with Alzheimer’s or other types of dementia.

For other care types, prices also rebounded sharply at the start of the decade but are now growing at a more modest level indicative of a stable market. That said, prices are still increasing faster than the rate of inflation. This is an indication that the economic recovery is not yet totally complete, and also can be attributed to demand that is growing faster than demand for other goods and services.

Senior living costs increased broadly although not steeply across all four census regions of the United States — the Northeast, Southeast, Midwest and West at rates somewhat above inflation as indicated by Consumer Price Index data, which was 1.9%. In the same period assisted living costs increased 5.4% nationally and memory care costs increased 5.5%. But as noted above, price growth is stabilizing and will likely continue to stabilize. The forces of our market economy will drive the development of new communities to meet the growing demand. As supply grows to meet demand, prices will stabilize, which we are already seeing to some degree in our data.

A 2011 New York Times article describes how, in the wake of the great recession, builders were preparing for the wave of seniors and are developing plans to accommodate them. The article noted that the inventory had not been keeping up with the demographics, quoting Marilynn K. Kuker of Brightview Senior Living, a developer based in Maryland, who said, “It’s a great time to develop senior housing.” Many developers have joined this path and the ever increasing number of developments for seniors will undoubtedly moderate senior living prices moving ahead.

The disparity between senior living price growth and price growth for other goods can largely be attributed to the demand for senior living caused by the Age Boom and also the ever increasing number of Americans with Alzheimer’s disease or related types of dementia. While it’s clear this demand will be met by providers, it’s worth looking at forces at play:

As Boomers gradually transition into senior citizens, the number of Americans who are older adults will grow rapidly. As of the 2010 Census, there were 40 million seniors (65+) living in the United States. That figure will more than double by 2050, increasing to over 88 million people according to Agency on Aging projections.

What’s more, the number of Americans with Alzheimer’s disease is projected to triple by 2050 to 16 million people. This will drive an increasing need for memory care services in particular. It’s safe to say we’ll see the number of memory care providers flourish in the years ahead, as more and more Americans are living with Alzheimer’s and dementia.

A Benchmark for the Future

We aim to provide the senior living industry and public the most accurate and practical look at the course of private pay senior living pricing across multiple care types and regions  – not just now but in the future. A Place for Mom will release an updated price years and decades ahead.