Talented Seniors Show Us It’s Never Too Late to Shine 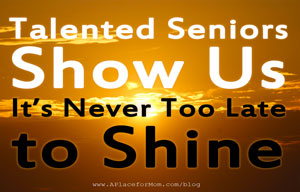 In observance of National Senior Citizens Day on August 21, 2014, we honor sensational seniors whose talents continue to shine bright into their Golden Years.

“You’re only as old as you feel.” “Age is nothing but a number.” “Young at heart.” These are all old adages we’ve heard time and time again. The reason for such sayings could be that our gifts, our talents and our contributions are ageless — and transform as we continue to age. In fact, a 2013 study by the Population and Development Review suggests that biological characteristics contribute to the aging process, implying that age is much more than just how many years on has lived.

Through their talents, not only can the following seniors teach us how to stay young at heart, but more importantly, how to embrace the aging process in an inspired, authentic way.

Hello, Is This Thing On?

Not too many people would dare to take center stage and perform stand-up comedy, but for 93-year-old Georgia Kunkel, the only fear she has is getting lost in the woods. “I have fears… of being alone… and of being alone in the woods. My whole life I’ve had a lot of attention, and that must be why I go out on the stage, because I crave the attention,” jokes Georgie.

Georgie doesn’t have much to worry about in being alone, either. The youngest of 11 children herself, she has three children, 10 grandchildren and 11 great-grandchildren to surround her. She even has a housekeeper she employs mostly for the company: “I never ask for help,” shares Georgie. “Here I am almost 94-years-old and I do my own grocery shopping, but I do have a house cleaner around mostly because I love talking to her.”

Since she has always found humor in everything in her daily life, it was natural for Georgie to take it to the stage. “I just know how to turn a phrase,” shares Georgie. “I was in my late 70s when I started going on stage. I have stacks and stacks of material. The objective of comedy is to talk about your own life and relive it. I go to the comedy nights and I don’t understand some of the stuff that the young people are talking about, but they sure seem to understand mine!”

Georgie started out in local comedy clubs around Seattle, but found some weren’t too nice to the elderly. “I don’t get offended but if a comedian gets mean spirited about old people, I let them know, ‘Boy, don’t you try that with me around!'” Fortunately, she has now found some senior-friendly comedy clubs including The Comedy Womb at The Rendezvous — a female focused open-mic comedy event. She also takes her act to senior centers and communities, and public schools.

Not only does Georgie turn a phrase for comedy, she also churns out words for readers. She prides herself on being a feminist and wrote the book, “You’re Damn Right I Wear Purple: Color Me Feminist.” She was a Rosie the Riveter, drilling holes into B-17 Bombers during World War II, and was one of many teachers who fought for gender equality during the women’s movement of the 1960s. “I think about what we went through,” recalls Georgie. “I taught for 30 years, and had to teach an extra 30 years to retire because I was fired four times for being pregnant each time.”

Georgie also helped write her late husband’s book, “WWII Liberator’s Life: AFS Ambulance Driver Chooses Peace.” Georgie and Norman Kunkel were married for 60 years and she was by his side right to the very end. “I had to fill 24 hours of in-home care, so I had to hire people, caregiver administrators, to help watch him because he wasn’t the kind of man who would ask for help.”

Georgie and Norman met at the summer hot spot in 1943, the Trianon Ballroom in Seattle. Norman went overseas and sent Georgie a ring with a note that said, ‘Consider yourself engaged.’ “He met the Queen of Tasmania, but he came home to me,” recalls Georgie. “I now go with a new fellow and as soon as I told him I was a feminist, he didn’t know what to do with me — open doors or not. I told him that being nice is still important to a feminist.”

Georgie also contributes to the Westside Weekly, formerly the West Seattle Herald. “I write more anecdotal articles for them. Sometimes I surprise myself, ‘Did that just come out of me?’ What can I say, I can just write,” she exclaims. Read a selection of Georgie’s articles here.

A Model of Aging for Younger Generations

You can find Georgie connecting with younger generations from preschool to third graders, through stories about a very special doll named Patsy. “I had this doll since I was eight years old,” shares Georgie. “Patsy’s coat is quite special. During the great San Francisco fire that wiped out everything, a store owner had given the girl of a family that lived near us a red plush coat, which was eventually handed down to my family, and Patsy’s coat was made from this coat.”

Georgie thinks it’s important for seniors and the youth to have a connection in order to change society’s outlook on aging. People see a senior in a walker or wheelchair as a “victim” or a “sufferer” instead of seeing the “person,” and Georgie assures us that when the day comes that she’ll need a walker, she’s going to “jazz it up.”

“I have decided that my purpose in life now that I am elderly is to model healthy aging for younger people. This world in which technology is paramount has a tendency to ignore the elderly or think of them as simply marking time until they die. I want to help change that view of the elderly. Our wisdom and experience needs to be shared. It is more difficult to share it when the ages are segregated so often. I offer to tell stories to school children and am speaking to groups all over King County.”

If you live in the Seattle area, be sure to catch Georgie’s upcoming comedic act at The Comedy Womb at the Rendezvous on September 16, 2014 where she will dedicate her performance to her son who has passed.

Seniors that Shine in their Communities

In addition, we asked our partner communities to share with us their resident talented seniors. Here are three we’ve highlighted and more inspiring seniors can be found in the slideshow below:

Edna Mason is 92-years-old with a charitable heart. During a hat drive at Astor Place in Astoria, Oregon where Edna calls home, she discovered a natural talent for knitting. Prior to the hat drive, Edna had no idea how to knit, and with a goal to reach, she discovered this new passion.

“The Astor Place donated 1,040 hats which were donated and handmade for “The Wishing Tree and Food Basket Program,” shares Allanah Rose, Community Relations Manager. “This goal could not have been met without the dedication and knitting passion from Edna. In a few short months, Edna made 48 hats for this charity.”

It didn’t stop there. Edna started making hats for her family, including the grandkids. “What Edna liked most about the hat drive was the social aspect of this activity,” Allanah continues. “Although she learned sewing skills while in 4-H as a young girl, she had never knitted and is now our resident expert and leads our ongoing knitting activities here at Astor Place. The residents, staff and over a thousand needy members of our community are grateful for Edna’s knitting talents.”

Sigmund (Ziggy) Silbert is 92-years-old and is a man of many talents. One of the Holocaust survivors that reside at Heritage Pointe in Mission Viejo, California (a community that specializes in Jewish traditions and lifestyles), Ziggy “has been instrumental in ensuring all survivors are recognized through his documentary efforts,” shares Pamela Davis, Director of Special Events. Ziggy also makes personalized gifts for the staff and other residents of Heritage Pointe, including bookmarks of all 44 U.S. Presidents, which he was inspired to do from working in the community library.

The talent Ziggy is most known for is his jewelry making. Pamela says that Ziggy creates necklaces and keychains from his half dollar and dollar coin collections, and heart shaped necklaces, personalizing them with the recipient’s names. “Many of the staff walk the community proudly wearing their personalized necklaces knowing that Ziggy’s love went into the creation of each and every one. Ziggy is our treasure and livens up each day with his zest for life. He is now 92 years young.”

Agnes McKee is 105-years-old and one of San Diego’s oldest residents, and the oldest person to throw the ceremonial first pitch for a Padres game last month. With all the media coverage she’s gotten, Agnes may be the most famous resident at Fairwinds Ivey Ranch in Oceanside, California.

It was Sheila Alston, a sales advocate at the Leisure Care community who first pitched the idea to the baseball team to have Agnes throw the first pitch for her 105th birthday. She practiced tossing the ball overhand and underhand with the Fairwinds Ivey Ranch staff prior to the big day. Lois A. Bowers of Long-Term Living Magazine reports, “The Padres gave her a jersey with the number 105 on the back, and the fans at the ballpark cheered for her efforts. Those fans included fellow residents from the retirement community, and additional residents watched the game from Fairwinds-Ivey Ranch.”

Agnes shares with San Diego Fox 5 News that baseball was the interest of her late husband, and Agnes’ true interests lay in painting, playing Bridge, sipping on a classic martini and getting dressed up to go dancing. She finished out her birthday with dinner with the Mayor of Oceanside, Jim Wood, and the Oceanside Fire Department.

What’s the secret for being a happy and healthy centenarian?  “I have no idea how I got to be this old,” Agnes shares with San Diego Fox 5 News. “I tell people I enjoy life. I’m a happy person.” More photos from her big day can be found on her Facebook page.