The Splendor of the Maxine Cartoon 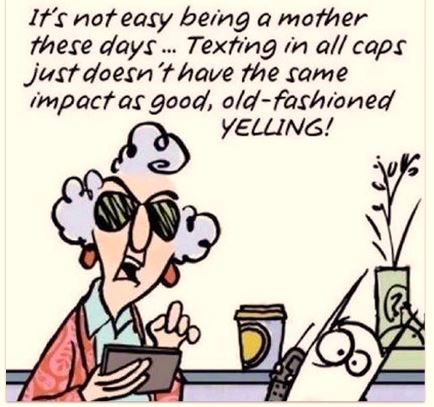 A Place for Mom has discovered the undeniable appeal of the Maxine cartoon and how she does a fabulous job representing female senior citizens.

Maxine is, quite simply, relatable. She pokes fun at aging and real life issues in an acceptable way. Her appeal is obvious every time we post one of her cartoons to the APFM Facebook page as we get phenomenal engagement from our audience, including off-the-chart shares, likes and comments.

So what’s the story behind this fictional character? Read on to learn more about why America decided to make her a celebrity.

To answer that question: Her following, quite simply. Hallmark launched Shoebox in 1986, along with the Maxine character, and took America by storm. According to Hallmark, “Nobody knew that Maxine’s crabby character, gracing the covers of a few Shoebox cards, would become famous. But it didn’t take long to see that Maxine’s irreverent quips about aging, the workplace, retirement, political correctness, and of course sex (or the lack of it) had struck a cord.”

Americans have purchased more than 220 million Maxine greeting cards, and Maxine is still the first—and only—greeting card character to move from the card aisle, directly into popular culture. “Perpetually one of Hallmark’s top-performing characters, today Maxine has her own books, comic strip, calendars, and website. Her likeness—and attitude—have also appeared on everything from t-shirts to paper towels,” Hallmark boasts.

A Place for Mom Favorite

It’s no secret that our readers like inspirational images. Add a little humor to those with an iconic, wise-cracking character and you have Maxine! 10,000 people are easily reached when we post Maxine’s wisdom to Facebook.

One of our Facebook readers comments, “I just love her! Always good for a smile.” Another jests, “How is she so smart?” Obviously Maxine is a hit when it comes to personifying anyone who’s real and tells-it-like-it-is.

Here are some of our readers’ favorite Maxine images:

About Jon Wagner, the Creator of Maxine

John Wagner — or “Arty-Boy” as Maxine likes to call him — says Maxine was inspired by his mother, his maiden aunts and his grandmother, the woman who bought him art lessons when “fill in the pumpkins” was about the extent of his art classes at St. John’s Catholic School he attended in Leonia, N.J. John remembers doodling as a preschooler, and says both his grandmother and his mother encouraged his artistic interests. He eventually attended the Vesper George School of Art in Boston, and landed at Hallmark as part of a new artists group.

But it was the birth of the humorous Shoebox Greetings (a tiny little division of Hallmark) in 1986 that added a new dimension to John’s professional life. The Shoebox way of seeing the world unleashed his talents and he created Maxine.

“Cartoonists are sensitive to the insanities of the world; we just try to humanize them,” John says. “If Maxine can get a laugh out of someone who feels lonely or someone who is getting older and hates the thought of another birthday, or if she can make someone chuckle about stressful interpersonal relationships, then I’m happy. Putting a smile on someone’s face is what it’s all about.”

Can you relate with Maxine? Are you surprised that she has been so popular with the A Place for Mom audience? Feel free to share your favorite Maxine wisdom and stories. And if you have another adorable fictional character you relate with, we’d love to also hear about those favorites in the comments below.