Why We Love Betty White 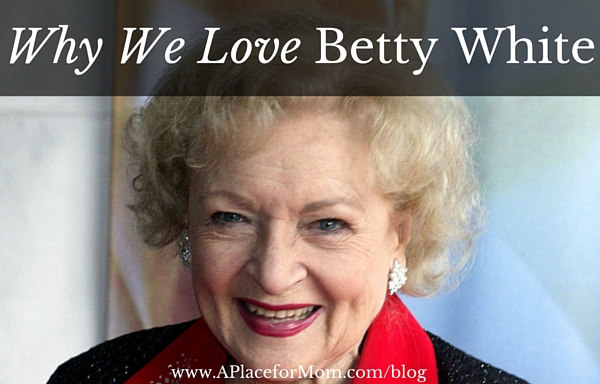 Active in her career and passionate about animal welfare, Betty White has been a household name for over 70 years. She’s genuine and proud of her age, and she gives us much to admire.

Betty White is not only an animal activist, award-winning actress, former model, Guinness World Record holder and social networking icon, but the oldest person to host “Saturday Night Live” and to receive an Emmy nomination.

What’s more, is that on January 17th, she will turn 94. In honor of her birthday, here are the reasons why we love Betty White.

10 Reasons Why A Place for Mom Loves Betty White

Betty White’s entertainment career began in 1939 and is still going strong today. A health-conscious, sharp-witted and gracious persona, her love for life comes across clearly in interviews and television appearances.

In an interview with ABC News, White expressed the importance of celebrating life. She says that even though we suffer losses, it’s better to have a good attitude and “accentuate the positive,” especially as we get older. It’s our mental attitude that leads us to dread aging, and, as she calls it, a “waste of a lovely life.” Instead, people should embrace their age and make the most of it.

As if her attitude isn’t enough, here are 10 other reasons why Betty White is easy to love.

1. One of the first female producers in Hollywood: Betty White had creative control (along with George Tibbles) of her 1950s television series “Life with Elizabeth.”

2. Animal rights activist: She’s one of the country’s leading activists on animal rights and has donated her time and millions of dollars to the animal charities that she supports.

4. Social networking phenomenon: She uses Twitter and became a social media sensation in 2010 when a group of fans started a campaign in support of her hosting “Saturday Night Live.”

7. Oldest person to have been nominated for an Emmy: She was nominated at age 90 for Outstanding Host for a Reality or Reality-Competition Program for “Betty White’s Off Their Rockers.”

8. Author: White has written several books, including memoirs on her observations about life and her years in television. She’s also authored books on animal welfare and the benefits zoos provide for animals, people and the environment.

9. Health-conscious: White says she’s taken care of her health her entire life. She does crossword puzzles to keep her mind sharp, stays socially active, keeps current in what’s going on in the world, pays attention to her balance and has a two-story house with a set of stairs that help her stay strong.

10. She loves her job: When asked if she planned to retire soon, White said, “‘Why should I retire from something I love so much?'” She’s active, healthy and sought after and says she can’t imagine finding something outside of her profession that would be as much fun.

What seniors in your life do you love for their activism, attitude and spirit? Share them with us in the comments below.