Olympics and Aging: Athletics Extending Past Your Prime 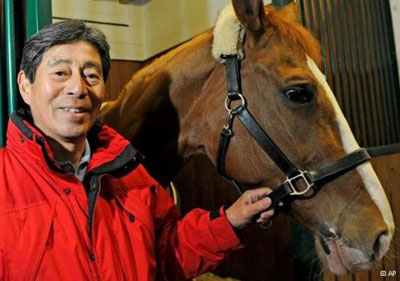 The oldest competitor of the London 2012 Olympics and second-oldest Olympian of all time, Hiroshi Hoketsu of Japan, competes in the Dressage Grand Prix competition.

Most people would agree that a person’s prime of life generally falls in his/her 20s or 30s. But Hoketsu of Japan continues to defy the odds and is performing at not only an impressive, but also highly competitive, level—and all at age 72!

So if you watch the Olympics and feel old (as I do), as the majority of the incredible Olympic athletes have average ages that fall under 20; be reminded that a person’s prime is relative. Drive, healthy-living, determination, and of course genetics, all play a role.

And what is Hoketsu’s secret? Well according to him, “Have a good life, enjoy yourself and do the things that make you happy.”

While Hoketsu is a bit of an iconoclast, he makes a point about aging gracefully. “It’s all about keeping yourself happy. The biggest motivation for me is to keep feeling that I am improving. If I feel I am getting worse than before, then I will stop.” This advice of setting your own goals and listening to your own body is huge. Love of dressage plays a big role in motivating Hoketsu, but he also has a partner who keeps him going—his horse, Whisper.

When asked if he will attend the 2016 Games, Hiroshi Hoketsu says he will not as his horse, Whisper, will then be 19 years and too old to compete. His fondness for her runs deep as he declares “I’m not the miracle. She is. Very strong, really amazing.” And whisper truly is amazing. Apparently she overcame a cataract to compete with Hoketsu. The senior duo make quite a team in their dressage dancing.

In Japan Hoketsu is revered to as “The Hope of Old Men” to which he modestly shrugs off commenting that “Age does not matter, I’ve never thought how old I feel.” And when he finally returns home to Japan next month to his wife of 42 years whom he has not seen in over a year, there will be a major fanfare awaiting his arrival. But Hoketsu humbly remarks, “People think I’m a miracle. But I’m just an ordinary man.”

So realizing and living up to your own potential is the key. Hiroshi Hoketsu is an amazing role model for us all.

Oldest Olympians, Past and Present

It’s no secret seniors are more active than in generations past, but some of them are still competing among the best in the world. Many older adults headed to London when the Summer Olympics kicked off; once again helping to reshape the way people view retirement living. For example, American equestrian riders Karen O’Connor (54) and Rich Fellers (52) are among the oldest athletes representing their country in the Olympic Games.

In this Olympics, Mary King of Britain at age 51 won a silver medal in this her sixth Olympiad, Greg Searle age 40 captured a gold medal in rowing, and fellow equestrian Ian Millar age 65 broke a record by competing in his 10th Olympic Games.

And the oldest Olympian of all time? In 1920, Oscar Swahn (then 72) won a Bronze medal at the Antwerp Games.

Watch this video that features Hiroshi Hoketsu and other amazing senior athletes who defy the odds of age: