Golden Olympians: Where They Are Today 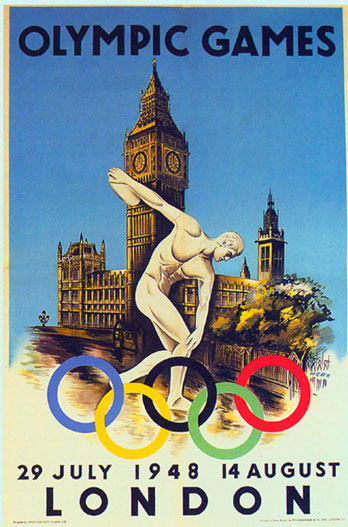 Former Olympians can teach us a thing or two about aging gracefully and keeping a healthy-living perspective. Learn where some former Olympians are today and why fitness has made such an imprint on their daily lives.

Times have a-changed for the Olympics. 1948’s World War II bombed city was the ambiance for the last London Olympics, where athletes gathered to compete for their athletic passion, despite the war-wrecked time. The city was slowly being rebuilt and the majority of the 300 American athletes competing in the games arrived in England on the S.S. America without a place to stay.

This elderly ensemble of former Olympic athletes still have quite a presence. Here are a few of their incredible stories. There’s nothing like history and athleticism to inspire and give perspective to not only how life has changed, but also how important it is to maintain a healthy lifestyle.

Lee was the first man to win back-to-back gold medals in Olympic platform diving and the first Asian-American to win an Olympic medal for the United States. He was born in Fresno, California to parents who owned “a little chop suey restaurant.” While he dreamed of becoming a diver, Lee had to overcome many obstacles; including not having a regular place to practice his diving since people of his ethnic decent were not allowed into the local pool during those days. His coach dug a pit in his backyard and filled it with sand which gave Lee a temporary place to train by “jumping into the pit” in specific ways.

Lee’s accomplishments were not limited to athleticism. Lee received his M.D. from University of Southern California’s School of Medicine in 1947 and then went on to serve the U.S. Army Medical Corps in Korea. While serving in the Army, Lee won the James E. Sullivan Award, an accomplishment given to the most outstanding amateur athlete in the U.S.

Lee spent years as a coach to Olympic divers, including Pat McCormick, Bob Webster and Greg Louganis—who has actually had diving moves named in his honor. Lee is a member of the U.S. Olympic Hall of Fame, continues to lead a healthy and accomplished life and today has a landmark, “The Sammy Lee Square”, named in his honor in L.A.’s Koreatown.

She, too, faced racism as blacks could not particpate in organized athletic activities in Southern schools and YMCAs in her Albany, Georgia hometown. But this did not deter Alice from a life of athletics; instead she practiced in dirt roads and jumped barefoot at the neighborhood playground. In 1939, at the age of 16, Alice received a scholarship to attend a preparatory school. But before classes began, she competed in the women’s track and field national championship—breaking both the high school and collegiate high jump records (and, amazingly, without wearing shoes!). After this she won many national competitions and, eventually, qualified for the Olympics, where she won 25 national titles, mainly for the high jump, despite having a back injury.

Patty Elsener was right behind Hall of Fame diver, Vicki Draves, and won the silver medal in the 10m platform and the bronze medial in the 3m springboard in London’s 1948 Olympics. She was so excited for the opportunity to compete after World War II had caused the cancellation of both the 1940 and 1944 Olympic Games. In fact, 1948 was the first year the world came together for athletic competition in 12 years, and Vicki was proud to be a part of the competition and celebration.

Patty’s career began in 1941 when she taught herself to swim at San Francisco’s Fairmont Hotel Plunge pool. She was a natural and recalls “loving water from the start.” The summer recreational coach at the hotel, Clyde Devine, encouraged Patty’s parents to take her to dive under coach Phil Patterson, who already coached Hall of Famer, Helen Crlenkovich. So, for the next four years while a student in the San Mateo school system, Patty rode her bike 2 miles to the train station to take the train to San Francisco and then take a cable car for daily training at Fairmont.

In the summer of 1945, the pool closed and Patty moved to Crystal Plunge to train with Charlie Sava’s team. The pool did not have a decent diving board, so Ernie Brandsten of Stanford University and maker of diving boards, gave Patty her own board. Patty became the only diver on her team and began winning titles in 1946, including the 3 meter indoor title in Seattle, Washington. She also competed as a swimmer and even won medals in swimming competitions.

After Patty graduated from high school in 1947, she went to Santa Barbara to train with Hall of Fame Coach Fred Cady. After becoming really ill in September, she moved back home and wasn’t well enough to dive. It wasn’t until Coach Jimmy Hughes started to work with her again to rebuild her diving and even introduced her to platform diving; which was an obstacle for Patty as she had a fear of heights. In fact, it was very difficult for Patty to climb the 33 feet of stairs and because she had to learn tower diving so fast, she didn’t have the proper technique and kept hitting her left wrist to her head, causing a lump on her head and a badly damaged wrist. As a result, the Detroit Olympic Trials were difficult for Patty, but she still made the Olympic team in two events—winning both a silver and bronze medal, despite her injuries.

Patty Elsener, now Patty Homan, lives in San Bruno, California and continues to love the water to this day. She has shared this passion with both her family, including her two daughters, son and grandchildren as well as her community. She doesn’t do any daredevil dives anymore, but she still swims to help stay in shape.

Sage Lessons of Life and Athleticism

Both Lee and Coachman possessed an uncanny internal drive and conviction. Their inspiring stories of dedication, athleticism and determination are something we could all learn. They exercised both their bodies and their minds and their sports’ enthusiasm is contagious to thousands.

Read more about 1948 Olympians and discover where they are today: Their Golden Years, by the New York Times