The 10 Most Beautiful Women Over 65 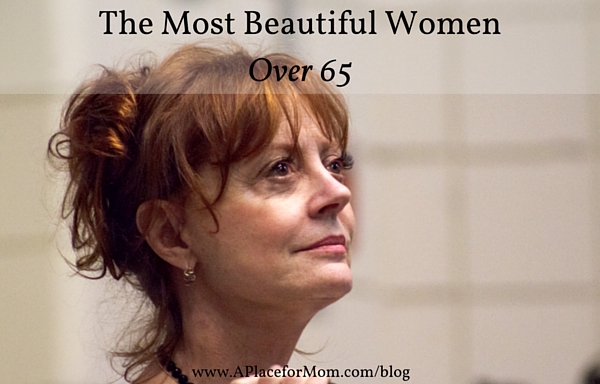 Meet 10 of the most beautiful women over 65 who will make you rethink the idea of getting older, from actresses to fitness mavens and writers.

It may be a truism, but being beautiful isn’t just about physical appearance. As we age, our ideas about beauty change and deepen even further, and less tangible qualities come to the forefront: a person’s attitude, their bearing; how they treat others; how they have affected the world around them; and whether they’ve made the most out of life, whatever that may mean for them as an individual.

The Most Beautiful Women Over 65

Spanning the decades from age 65 to the triple digits, these 10 women over 65 continue to be active, charismatic and vibrant. Many are pioneers in their career fields. Every one of them is beautiful.

“Don’t go by age. It means nothing.” That’s what Tao Porchon-Lynch has to say on the subject of aging gracefully, according to the Huffington Post. She’s been practicing yoga for over 70 years, and is the perfect example of the health benefits of yoga for fitness and stress management — and for feeling youthful and vital.

Prolific and disciplined Canadian author Alice Munro published no less than 14 short-story collections, the latest of which came out just this year. Her busy, award-winning writing career did not stop her from raising three daughters and helping her first husband run a bookshop, although she now says, in a New York Times article, “I do things quite purposefully now to get out on the surface of life.”

A breast cancer survivor, journalist and women’s rights activist, Gloria Steinem is a true icon of the feminist movement. In addition to helping found “New York” and “Ms.” magazines, she’s been an outspoken social critic as well as a thoughtful writer on topics such as aging, self-image and the women’s movement. She also has no plans to quit. On Biography.com, she says, “The idea of retiring is as foreign to me as the idea of hunting.”

For some of us, retirement is just another chance at a second calling. Ernestine Shepherd didn’t get into bodybuilding until she was 56, but by 2010, she had earned the Guinness Record for World’s Oldest Performing Female Bodybuilder. Besides waking up at 2:30 a.m. and running 10 miles before 5 a.m., she follows a strict diet and fitness regimen every day. And she’s doing what she loves. “Don’t listen to anyone who says you’re too old or starting out too late,” she says, on Time.com.

Can you believe this actress, activist, and guru of fitness is 78? Me neither, but take a look at her accomplishments and you’ll see she’s lived life to its fullest and is still going strong. The daughter of actor Henry Fonda, Jane Fonda starred in classic films like “The China Syndrome” (1979) and” On Golden Pond” (1982), and her anti-Vietnam War stance briefly earned her the nickname “Hanoi Jane.” She’s still speaking out on social causes — and still acting and making fitness videos, this time aimed at an older audience.

Born in Tennessee as Anna Mae Bullock, Tina Turner started dancing and singing onstage in her teens, and she’s hardly stopped for breath since. Her 1984 solo album “Private Dancer” sold more than 20 million copies, and she’s one of only 50 women to be inducted into the Rock and Roll Hall of Fame, says the Austin Chronicle. Though she’s mostly retired now, she still occasionally tours and shows off her famously fit legs.

Imagine being voted “Body of the Year” in a fitness poll and beating out women decades your junior. That’s what Dame Helen Mirren did, just a few years ago. The British actress and Oscar winner is truly a star of both stage and screen, and attributes her continuing fitness to walking her dogs — and a little Wii Fit here and there, reports Shape magazine.

Though she’s also recognized for her social and political activism, most of us know Susan Sarandon through her work as an actress, starring in films ranging from cult classics like “The Rocky Horror Picture Show” (1975) to Academy Award winning “Dead Man Walking” (1995). More recently, she traced her family roots in Wales on the program “Who Do You Think You Are?”

On starting a new business just a handful of years ago — her own line of all-natural skin-care products — this former model and stylist for the stars tells FabOverFifty that she’s “never too old for anything!” Her beauty regime is fairly simple, and she advocates a good night’s sleep for staying healthy and rejuvenated. “Sleep is the key to everything.”

While not considered a classic beauty, Meryl Streep has an undeniable charm. In an interview with Style magazine, she once insisted, “I didn’t have any confidence in my beauty when I was young. It wasn’t until I was older that I had the confidence to feel beautiful.” This blue-eyed living legend has been cited as the “best actress of her generation” as she is a versatile and intelligent actor who is able to transform into the characters she plays. From playing a Polish immigrant in Brooklyn in “Sophie’s Choice” to singing and dancing in “Mamma Mia!”; Streep is one of the most accomplished actresses of her time, winning over 30 awards and nominations while aging gracefully. She believes that beauty comes from within, and a healthy diet is crucial. She is an advocate for organically grown foods and is even a shareholder in the Community-Supported Agriculture Organization.

Who do you think the most beautiful women over 65 are? Let us know your favorites in the comments below, whether they’re famous icons or living family legends.