9 Most Inspirational Seniors from Television 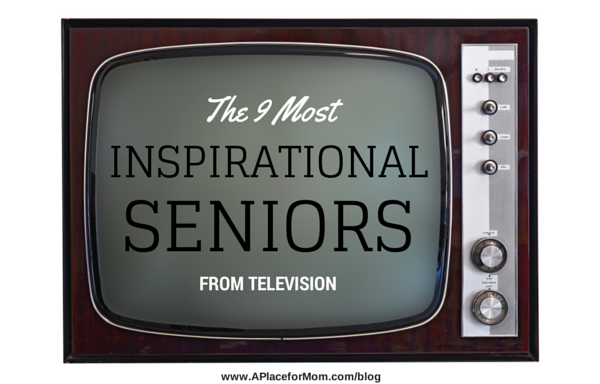 Seniors on television: they’re doctors and detectives, retirees and rabblerousers. But one thing is certain — they’re anything but boring. Learn more about some of the most inspirational seniors on TV.

Seniors continue to be underrepresented on television, and when we do see them, it’s usually either as comic relief or in the context of a pharmaceutical commercial. Though, the good news is there are some truly classic and inspirational portrayals of seniors on TV and we can find those in some of our favorite shows, both past and present.

Here’s a selection of beloved senior TV characters with style and substance:

“How come whenever my ship comes in, it’s leaking?”

Bea Arthur, who died in 2009 at age 86, is best known to many of us for her role as the practical, plainspoken Dorothy on the popular 1980s sitcom “The Golden Girls.” She was always the grounded one when her roommates were flighty or frivolous, but just because she was serious didn’t mean she wasn’t seriously funny or beloved. In 2008, Entertainment Weekly selected Dorothy as the Grandma for “The Perfect TV Family.” Arthur was an inspiration in real life, too, from her breakout role as Yente the Matchmaker in the original Broadway production of “Fiddler on the Roof” to her later-life support for various social welfare causes.

Sheldon Cooper: “…It’s like all the men I’ve looked up to have gone away.”

Arthur Jeffries: “You know, it’s all right to be sad about it, but just make sure to appreciate those who are still there for you.”

Bob Newhart may be most beloved for his 1970s and 1980s sitcoms, “The Bob Newhart Show” and “Newhart,” but at age 85, he’s still making us laugh playing bit parts in a wide range of TV series. His recurring role on “The Big Bang Theory” as aging children’s television science personality Professor Proton earned him his first Emmy Award in 2013, and won him a whole new generation of fans.

“We have the potential to be nobler than we know and better than we think.”

Jessica Fletcher was the retired widow and author of detective stories with a knack for solving mysteries in each week’s installment of “Murder, She Wrote.” Though it was just one of Angela Lansbury’s many memorable roles over the years, this one garnered her legions of fans and placed her on many a “Top TV Detectives” list. Now 89, Lansbury is involved with numerous charities and continues to act on stage and screen.

Veteran actor Andy Griffith appeared in a staggering 195 episodes of “Matlock” as the eponymous defense attorney, discovering clues, clearing names of the innocent and identifying perpetrators in his memorable folksy style. The show ended when Griffith was 69 years old, but he reprised his popular role a few years later, in 1997, on “Diagnosis: Murder.” Griffith died in 2012 at age 86, after a career filled with well-deserved accolades and respect, for his incredible work as Andy Taylor on “The Andy Griffith Show,” to Ben Matlock on “Matlock.”

“Principles are like prayers; noble, of course, but awkward at a party.”

As the Dowager Countess of Grantham on BBC’s “Downton Abbey,” the highly accomplished Dame Maggie Smith is always ready with a pithy observation or a wry comment. Her character shows the wisdom of the older generation, but also the open-mindedness necessary to cope with the changing times — and through it all, she loves her family with a vengeance. The Dowager Countess is only the latest in an impressive list of acting credits for the 79-year-old Smith, who is familiar from the stage and the big screen as well as the small screen.

“I’ve come to the conclusion there are only two reasons for ever doing anything: one is love, and the other is fear.”

With her kind manner and endless patience, it’s no wonder Sister Julienne is the one all the midwives — and the other nuns — go to with their troubles. Sister Julienne, played by 61-year-old Jenny Agutter, is just one of the team of midwives who care for the mothers of an impoverished district of East London in the 1950s. She also helps care for Sister Monica Joan, an elderly nun suffering from dementia whose only home is Nonnatus House. Agutter’s portrayal is just one inspiring part of a show that’s all about the daily lives of professional caregivers.

“Do you know there’s a reasonable explanation for everything if you just put your mind to it?”

The famous LAPD homicide detective Columbo was so awe-inspiring in his decades of TV appearances that he didn’t even need a first name. Actor Peter Falk played the seemingly absentminded but actually shrewd detective until 2003, across 10 seasons of television, until he was age 75. He died in 2011, but will go down in history as “Everyone’s favorite rumpled television detective,” in the words of historian David Fantle.

“If I’m wrong, you can arrest me for breaking and entering!”

Our last TV sleuth on the list is Dr. Mark Sloan, played by none other than the venerable dramatic and comedic actor Dick Van Dyke. Dr. Sloan is Chief of Internal Medicine at a major L.A. hospital, but he also helps his son, played by Van Dyke’s real-life son Barry Van Dyke, solve mysteries for his job as an LAPD homicide detective. Van Dyke, now 88, appeared on the show from 1993 to 2001. Prior to that, he had memorable roles on “The Dick Van Dyke Show,” numerous other TV appearances, and starred in movies such as “Mary Poppins.”

Widow Elka Ostrovsky is in her 80s and had a difficult early life, but that doesn’t mean she isn’t having a good time now. On the show “Hot in Cleveland,” she gets thrust back into the dating and nightlife scene when three has-been actresses move back from Hollywood and rent her house. As Elka, the 92-year-old Betty White is unstoppable as ever, with memorable scenes and even more memorable one-liners. Of course, who could forget White’s iconic role as Rose on “The Golden Girls?” I think we can all agree that she should keep delivering laughs for as long as possible.

Who is your favorite TV senior? Is there someone who should be on our list but isn’t? Share your thoughts with us in the comments below.