How Pets Can Help Detect Cancer in Seniors 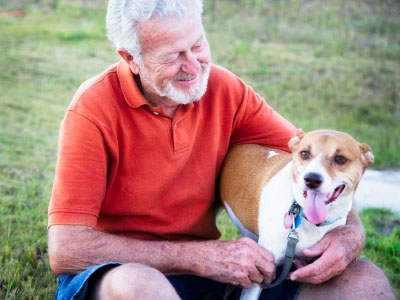 The nose knows! Scientific evidence over the past few years indicates that dogs can be specially trained to sniff out lung cancer, bowel cancer, and even ovarian cancer.

Next time Fido licks your face, think about this: researchers throughout the world are finding that dogs’ extra-sensitive olfactory systems can be trained to detect different types of cancer—sometimes long before symptoms actually appear. Early detection of many types of cancer is key to successful treatment, but diseases such as lung cancer and ovarian cancer are notoriously difficult to diagnose early. That could change, thanks to emerging scientific evidence that dogs can reliably sniff out telltale compounds in the body that indicate the presence of cancer.

It’s tempting to ask how we can train our senior loved ones’ dogs to sniff out cancer, but the truth isn’t that simple. The dogs in question aren’t just any dogs—they’re specially trained to detect VOCs, or volatile organic compounds, that are telltale markers of cancer cells in the body. The canine researchers have been able to detect such compounds in the breath or in stool samples from volunteers.

Sniffing Out Lung and Bowel Cancer

A study conducted last year in Germany was the first to demonstrate that dogs can reliably sniff out lung cancer, the most common cause of cancer-related death worldwide. Early detection has focused on analyzing breath specimens from cancer sufferers and attempting to identify telltale compounds, but research has so far only made slow progress.

That’s where our furry friends come in. Dogs trained to recognize VOCs by smell were able to identify 71 out of 100 samples with lung cancer. “This is a big step forward in the diagnosis of lung cancer,” Thorsten Walles, the author of the study, said in a public release from the European Lung Foundation. “In the breath of patients with lung cancer, there are likely to be different chemicals to normal breath samples and the dogs’ keen sense of smell can detect this difference at an early stage of the disease.”

An earlier study on bowel cancer in 2011 showed even more promising results: a trained Labrador retriever was able to successfully distinguish the presence of bowel cancer in 33 out of 36 breath tests and in 37 out of 38 stool tests.

A Promising Future for Sniffer Dogs

Other research, as well as anecdotal evidence, supports the ability of dogs to detect other types of cancer, including bladder, skin, breast, and ovarian cancer. In fact, Swedish researchers trained dogs to distinguish different types and grades of ovarian cancer. All this is good news for early detection. The sooner cancer can be detected and identified, the greater the opportunity for successful treatment, and the more likely our loved ones will live healthy, and satisfying lives well into their golden years.

Have your senior family members benefited from early cancer detection? Whether you were informed by your dog or your doctor, we want to hear your stories and invite you to join us in the comments.