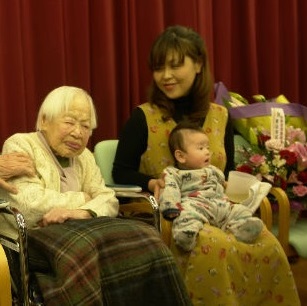 Happy birthday to Misao Okawa, the world’s oldest woman alive today, who turns 115 on Tuesday. Misao, born in 1897, has lived across three centuries.

The world’s oldest living woman, Misao Okawa, turns 115 tomorrow in Osaka, Japan where she has lived most of her life. Misao was married in 1919 and had five children, two of whom are still living and past the age of 90. Her 115th birthday comes at the heels of being honored by Guinness World’s Records for her longevity after overtaking a fellow Japanese woman, Koto Okubo, who passed away in January. The world’s oldest living person, a man named Jiroemon Kimura, also lives in Japan and will turn 116 in April.

Japan: Longevity Capital of the World

It shouldn’t come as too much of a surprise that the oldest living people come from Japan. Japan is the nation with the longest average lifespan according to a United Nations Report. The average Japanese person lives to be 82.73 years while in the United States, which is ranked a dismal 40th, the average life expectancy is 77.97, almost five years less than in Japan. In fact, Japan has so many seniors that caring for them is one of the government’s foremost challenges.

Japan’s record life expectancy is thought to be associated with a number of factors. Genetics are probably part of the equation, but experts believe lifestyle factors such as diet are at play too. For example, fish is eaten much more commonly than red meat in Japan, which may keep rates of heat-disease down. Japan’s health care system, which provides cheap universal coverage, is a major contributor as well according to Meredith Melnick of Time Magazine. But Misao herself had just one simple piece of advice for people hoping to live to 115: “Watch out for your health.”