Is The Future of Aging in the Hands of Google? 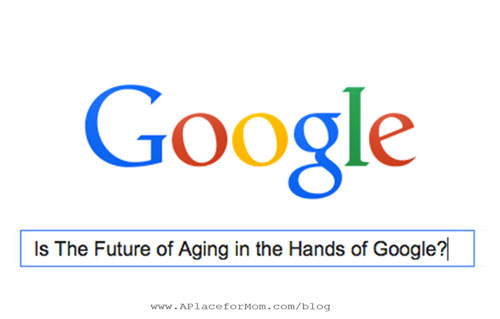 The new Google-backed venture to extend the human lifespan, referred to as “Calico,” has hired the head of global product development from Roche, the pharmaceutical giant, as well as a noted molecular biologist from Princeton to help fight global aging and ‘solve death.’ A Place for Mom’s SVP of Technology and CIO, Clifford Cancelosi, provides valuable insight into this fascinating venture.

“Who Wants to Live Forever?” is a song by Queen made famous in the 80’s movie Highlander about a group of immortals. I think this movie resonated strongly with Larry Page, Google’s ever-youthful founder and CEO.

In September, Page famously posted the initial announcement for Calico. Interesting announcements continue to emerge about Calico with the just recently announced addition of two key executives; Hal Barron, former head of global product development at Roche/Genentech, and David Botstein a noted geneticist from Princeton University. Google has invested in a number of  ‘moonshots,’ such as driverless cars and robotics, to name a few. “Don’t be surprised if we invest in projects that seem strange or speculative compared with our existing Internet businesses,” Page warns readers on Google+. I, personally, think Google’s investment in Calico falls into this category. That said, Google’s entry into this space is telling. What can Google bring that other entrants cannot?

1. Calico isn’t the only company focused on extending life, but Google is creating a ‘strong media buzz’ and increasing investor awareness.

3. Google has massive data centers with plenty of compute power to spare—which will likely aid significantly to the efforts—as Calico mines terabytes of data looking for genetic clues and insights.

Google has a strong track record of success with their investments, which means the promise of longer life could very well become a reality. This got me thinking about the implications of extending life and some of the challenges presented.

Calico and Unraveling the Secret to Aging

What is Calico, exactly? Calico, also known as California Life Company, is a newly created medical research organization backed by Google. Calico is attributed to Bill Maris, Google Ventures managing partner who began to see a marked increase in biotech related companies. Calico’s stated goal  is to “take on and conquer aging” as well as associated diseases related to aging. The basic premise of Calico is that the best way to tackle aging is to focus on preventing diseases, such as Alzheimer’s disease and cancer. According to Larry Page, “Illness and aging affect all our families. With some longer term, moonshot thinking around healthcare and biotechnology, I believe we can improve millions of lives.” Beyond Page’s soundbites and aspirational statements, not much more is currently known about Calico.

What Is Going On With Aging Research?

While Calico is still shrouded in mystery, we do know that biology and the life sciences have been hot in the technology sector. Investors are increasingly betting on companies that can provide innovative solutions to the technology-loving baby boomers generation that is reaching 65 in record numbers each day.This increase can largely be associated with the mapping of the human genome. One could imagine that you could study the genomes of long-lived humans to look for genetic similarities. Interestingly, Google currently has an investment in the controversial start-up 23andMe.com; which provides a DNA analysis so people can get more insight into their genetic data. Interestingly, this start-up could provide Calico with access to a readily-available and growing genetic database.

Another company, Proteus Digital Health, has created a digital health feedback system that includes wearable and ingestible sensors that work together to gather information about medication-taking, activity and rest patterns. This technology provides unique insight into a person’s physiology to help caregivers, doctors and families better understand specific health conditions. Having a technology you can swallow, that is powered by the human body, is a huge step in helping to identify and possibly treat some of the aging obstacles.

The topic of aging research is also buzzing in “TEDtalks.” Ted has recently hosted several conversations regarding the topic of extending life, and Aubrey de Grey, British researcher on aging, recently claimed he has drawn a ‘roadmap’ to defeat biological aging. In fact Grey provocatively proposes that the first human beings who will live to 1,000 years old have already been born. However, Jared Diamond, American scientist and author, provides a counter point to the idea of extending human lifespan; he mentions that there is an irony behind the latest efforts to extend human life span because it’s not easy for an old person to live in a youth-oriented society. Diamond does propose ideas on how societies across the world can grow old better, and with more friendly approaches to seniors.

The Reality of The “Fountain of Youth”

The reality is that most advanced industrial nations have already been dealing with the extension of life. In the United States in 1900 the average life expectancy was 46.3 and 48.3 respectively for men and women. By 1998, that number had grown to 73.8 and 79.5; a roughly 37% improvement. In this regard, aging and the so called ‘fountain of youth’ is relative. So is the question one of continuing to extend life, or determining how to extend life in a practical and satisfying manner? The latter sounds like the most appropriate answer.

Many of us dream of being able to live longer. Just imagine how many more ‘bucket list‘ items you could accomplish with all those extra years! But, there would also be a number of very practical challenges. For example, the average cost of assisted living today is $3,000 dollars per month, with an average stay at around 22 months. How would families financially deal with an average stay that was 44 months, 88 months or longer? If Calico were to slow the aging process, it’s possible that mankind could extend productive working years; something that would need to be done so as not to create a working financial system and society that functions with the majority of people as ‘senior citizen’ status. But how many people want to work 80 to 100 years, with the exception of people like Jeff Bezos and Steve Jobs? The truth is that most of us really look forward to retirement. It’s all about forward thinking; the ability to work longer could help people save more for retirement or it could exacerbate an already complex financial situation.

What to you all think? Should we live to 1,000? What challenges come to your mind? I’m looking forward to hearing all of your thoughts.

Clifford Cancelosi was named Chief Information Officer (CIO) and Senior Vice President of Technology of A Place for Mom, Inc. in April 2013. In this role he is responsible for the strategic vision, operations and overall management of the company’s technology division. He is particularly passionate about establishing operational excellence programs leading to increased efficiencies, reduced costs and improved customer satisfaction.