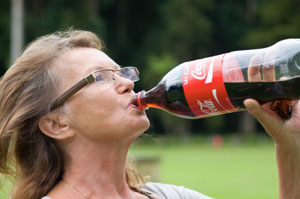 Steering clear of the-ever-so-tempting sweet aisle is a no-brainer.  But some of the foods below—such as yogurt, breakfast cereal and bottled water— are also foods you should avoid. And some vices, such as soda, can actually lead to many long-term health problems, such as dementia and stroke. Learn which unhealthy “health foods” to avoid while perusing the aisles at the grocery store. 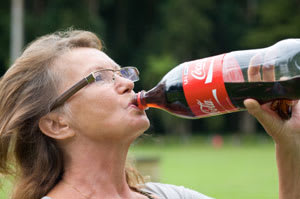 The Big Gulp is an American classic. And during the 80s an90s was sadly a staple of many Americans’ diets. The 2000s have been enlightening for the general public as far as adverse health effects associated with poor diets and lack of exercise through documentaries like Super Size Me and Subway’s “healthy” alternative to burgers and fries. However, many Americans are still eating poorly which impacts  the nation’s overall wellness.  Diet soda is still one of the most popular drink choices and with high levels of artificial sweeteners, acids preservatives and other harmful ingredients, soda can lead to kidney stones, dementia and stroke—along with many other long-term health ailments. And the scary part? There are also many other unhealthy food choices that masquerade as being healthy.

With the aging baby boomer population approaching 65 in record numbers, it’s important to make health choices that benefit the long-term well-being of not only our children, but also the beloved seniors in our lives. This is just one of the steps we can take to help each generation lead healthy lives, from childhood through the golden years.

Okay, so canned soup is probably not a surprise. Most of us know that canned soup typically contains large amounts of processed salt, MSG, additives as well as genetically engineered ingredients. But what some of us may not know is that many companies still use cans with bisphenol-A (BPA) in the lining. And this chemical has been identified as an endocrine disruptor as it can mimic or interfere with you body’s hormones and “disrupt” your endocrine system. This is why canned beans can also be harmful. So why not pull out your crock pot and make homemade stew, soup or beans? Making homemade soup can be easy and ensure you know what you’re putting in your body. And shopping at Whole Foods, PCC or other healthy markets offers many choices for healthy, natural bean choices that offer high-protein.

Most cereals are a combination of high-fructose corn syrup and genetically engineered corn, which does not offer the fiber and grain that many promise. Eating homemade oatmeal or muesli is a much healthier option (and you can also add fresh fruit to make it even more tasty!).

We did a post about dementia causing chemicals in food, including buttered popcorn, back in August. But it gets worse. Perfluorooctanoic acid (PFOA) is used in the liner of microwave popcorn bags. What we have not been told is that the chemical can leak into the popcorn, when heated. PFOAs have been linked to infertility, among other health problems. Popping popcorn on the stove top is not only a healthy alternative, it can also be fun. And coconut oil, sea salt and other healthy alternatives can be used to season.

Bottled water is supposedly health, right? Well according to Environmental Working Group, chemical pollutants, contaminants and even bacteria were found in 10 popular brands of bottled water. Not only that, he FDA only regulates 30-40% of bottled water, which means there’s only a small percentage tested. Not only that, phthalate, a chemical group used to make the plastic bottles for bottled water, can leech into the water and is a potential cancer-causing agent. The alternative? Installing a high-quality water filter for your tap or home.

Even though many juice brands claim to contain 100% or even 80% juice, this is not really the case after it is packaged. Not only does the flavor come courtesy of professional flavor, fruit juice is also notoriously high in fructose—whether it’s from added high fructose corn syrup or naturally-occurring fructose in the fruit. If you must drink juice, add filtered water to it. At least that way you’re getting more water.

This one surprised me. As a woman, I’ve always been told to eat yogurt for its “active cultures” and healthful bacteria (probiotics). However, pasteurized products will not provide you with these health benefits, as the pasteurization process destroys most of the precious enzymes and other nutrients. Some products at your local healthy food market, such as PCC or Whole Foods, as mentioned above contain the real deal. Fortunately you can also make your own yogurt at home and add fresh fruit and granola to make your taste buds dance.

And last, but not least—diet soda! Yes, we already know soda is bad for us. But it’s actually downright scary how bad. And diet soda is no better. A 2002 UCLA study found that consuming excessive amounts of sugar reduces the production of the brain chemical called brain-derived neurotrophic factor (BDNF). “Without BDNF, our brains can’t form new memories and we can’t learn (or remember) much of anything,” according to an article in Forbes magazine. Not only that, low BDNF levels are linked to depression, dementia and many other health problems—including a resistance to insulin and the body’s natural mechanism for knowing when to stop eating. And it only gets worse; soda is also linked to dental, heart, kidney, lung, bone and digestive system problems. And diet soda drinks usually include the artificial sweetener and food additive aspartame, which contains excitotoxin, or  substances added to certain foods and beverages that can cause nerve, and gradual damage to your brain. This nerve damage can actually lead to forms of dementia. So why not lower your risk for Alzheimer’s and dementia? All you have to do is stop drinking soda and diet soda.

Do you know of other harmful foods that should be avoided in the grocery store? If so, please share below. We also welcome comments about the article.