The Truth About Flu Shots and Seniors 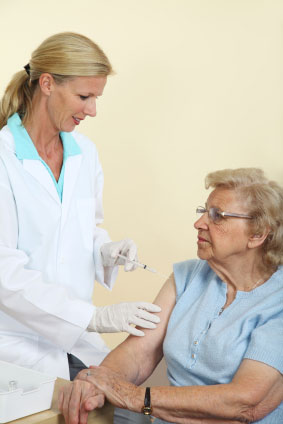 While vaccination is an important part of our winter bug-fighting arsenal, when it comes to older Americans, the prevailing wisdom on flu shots may need re-examining.

It’s that time of year again—the time when millions of Americans, young and old, line up at their closest pharmacy or clinic for flu shots, hoping to ward off the sniffles for another season. Caregivers and families are usually urged to make sure loved ones over the age of 65 get vaccinated, because they’re at greater risk for complications from influenza. In fact, the Centers for Disease Control and Prevention estimate that 90 percent of seasonal flu-related deaths occur among the elderly. But is the vaccine really as effective as we think it is?

How Does the Flu Vaccine Work?

The flu vaccine helps people produce antibodies against the particular strain (or strains) of flu they’ve been inoculated against. A recent article in Scientific American reviewed medical literature and research on flu shots published over the past decade or so, and found that the flu vaccine does provide good protection for adults under 65—it may confer as much as a 75 percent reduction in the risk of catching the flu during seasons when the vaccine is a good match for the virus strain that’s going around.

What Is the Effect of the Flu Vaccine in Seniors?

In older people, there is often a natural weakening of the immune system with age, meaning that the traditional vaccine may not work as well. Past studies on senior deaths caused by flu, and how many deaths have been prevented by the flu vaccine, have not been conclusive. Also, as of 2011 there haven’t been any clinical trials that looked at the elderly and their response to traditional flu shots. A vaccine with a live, modified version of the virus has been shown to prevent infection and death in seniors, but it’s not approved in the U.S. for adults over 50.

What conclusions can we draw from the confusing evidence? Unfortunately, from the studies done to date, it isn’t clear yet how much of an effect the flu shot has on senior health.

Should My Loved One Get a Flu Shot?

Despite the fact that the jury’s still out on flu shots and seniors, the CDC still recommends vaccination for high-risk groups, including those 65 and older. Recently, the FDA approved a higher-dose vaccine for older patients that may produce more antibodies, so that’s an option if you’re concerned that the traditional flu shot might not work. Ultimately, many scientists are hoping that more research will be conducted, and more effective vaccines developed, as time goes on.

Are you and your loved ones planning on getting flu shots this year? If not, why not? Let us know in the comments.