9 Famous Fathers and Their Successful Children 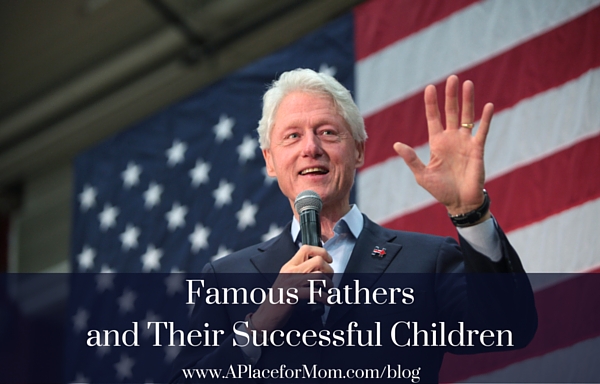 Dads have such a big job, from disciplining and providing positive examples for their children to supporting their families. This Father’s Day we’d like to pay tribute to some famous fathers whose successful children have followed in their footsteps.

We’ve all heard the “anyone can be a father, but it takes a real man to be a dad” sentiment. Dads are instrumental in their children’s development and studies show that their love may even play a bigger role in their kids’ development than their female counterpart.

Researchers found that, overall, the “love — or rejection — by fathers or mothers equally affects kids’ behavior, self-esteem, emotional stability, and mental health, but in some cases, the withdrawal of a father’s love seems to play a bigger role in kids’ problems with personality and psychological adjustment, delinquency, and substance abuse,” according to Ronald P. Rohner, Ph.D., Director of the Center for the Study of Parental Acceptance and Rejection at the University of Connecticut. Since a father’s love and example helps boost children’s sense of well-being and improve their emotional and physical health and later success in life, we’d like to showcase some famous fathers who have positively influenced their children to also be successful adults.

Famous Fathers and Their Successful Children

Here, in alphabetical order, are a few noteworthy dads whose daughters and sons have blossomed as adults:

Olympic and professional boxer and activist, Muhammad Ali, is regarded as one of the most significant and celebrated sports figures, even “The Greatest,” of the 20th century — and his model daughter, Laila, followed in his professional boxing and ethical footsteps. Muhammad recently passed away at the age of 74, and while he’s known for his impact in the ring, his legacy undeniably extends beyond that. Laila recently opened up about how her father served as a loving and positive role model to her and her eight siblings. She relays, “From the time we were little, Dad always brought us together and would sit us down and say, ‘You have different mothers, but you are sisters. I want you to come together and love each other.'” Muhammad united not only his children, but also people in general, whether it was through his inspiring quotes or humanitarian work; which were qualities passed to Laila and his other children. Muhammad wrote how he’d like to be remembered in his 2004 memoir, and his children and the world can attest to his success:

“I want to be remembered as a man who tried to unite all humankind through faith and love. And if all that’s too much, then I guess I’d settle for being remembered only as a great boxer who became a leader and champion of his people.”

George Bush Sr., President of the United States from 1989-1993, had an incredible impact on his son, George W. Bush, who was President from 2001-2009. George W. Bush publicly admitted that he “sought advice regularly from his father during his presidency,” reported Associate Press. “Destiny of Power” a biography about Bush Sr. describes him as the “epitome of gentility and grace, bred for power but also humbled by it.” George Jr. respected his father and followed in his footsteps. No one can deny this family’s political legacy in America.

Bill Clinton, the 42nd President of the U.S., has been had a strong influence on his daughter, Chelsea. As a business leader, NBC News correspondent, women’s rights advocate, AIDS research and global humanitarian, Chelsea keeps busy. Determined to foster independence and intellectual curiosity, Bill and his wife, Hillary, often pushed Chelsea to succeed. She admits she owes a lot to her father:

“My father told me nothing is off-limits in life. That there wasn’t anything I couldn’t do if I set my mind to it.”

Chelsea further discusses how her father held her accountable for her actions and being good member of society, while also raising her to lead as normal a life as possible. Chelsea continues to seek her father’s advice in her business dealings and in life.

Iconic actor, pianist, singer and television personality,  Nat King Cole, was an immense talent whose legacy continued through his also vocally-talented daughter, Natalie. In 1991, she helped her father achieve a posthumous hit by recording his hit “Unforgettable” and put their vocals together as a duet that became a hit. Though Nat died when Natalie was a child, this classy lady always felt honored by her dad and wanted his memory to “live on.” Though Natalie passed away at age 65 in 2016 as one of the most celebrated and iconic women in R&B, her legacy continues with her father.

65-year-old British rockstar Phil Collins daughter, Lily, is a rising Hollywood star, Lancome ambassador and face of the beauty line’s Advanced Genifique serum. Lily claims in a recent interview with MailOnline that it was growing up around her father’s fame that has helped her navigate her own burgeoning celebrity. Her father taught her that everything has a cost, especially being a celebrity. If being an actress is what she truly loves to do, she has to look at the pros and cons and:

“Have the ability to show and share as much as you feel comfortable with, but at a certain point — such as with the paparazzi — your life can get infiltrated,” she notes.

Before there was Bill Gates, co-founder of Microsoft, there was the senior Bill Gates, who celebrated his 90th birthday this year. The elder Gates has lived a remarkable life as an attorney, board member and society member and has proven to be an excellent role model for his now-famous son. In a recent interview with GeekWire, Bill Gates Jr. discusses his Dad’s influence on his life and how he “asks his dad for advice regularly.” But more than that, his dad helped him develop his business sense, prudent nature and sense of justice. Gates Jr. comments, “My Dad is very collaborative, very judicious, and he is serious about learning things and really knowing what he is talking about. He’s good at stepping back and seeing the broad picture.” Gates notes that he owes a lot to his Dad’s positive example and influence.

Lenny Kravitz’s daughter, Zoe, not only caught his acting bug, but also his style. “My style is influenced by my father,” she mentioned in an interview with InStyle. Zoe also respects her talented father who, she notes, has always been very supportive of her and her pursuits: “My dad was always very supportive. He knew this was genuinely who I am.” While Zoe’s upbringing was unconventional, her parents tried to instill normalcy in daily life. Leny is a self-proclaimed “proud pop” and was delighted when Zoe purchased land next to her father. He notes in an interview with Us Weekly:

“I love my kid. I want to enjoy being around her and for her to be near me.”

“Let It Be” known that famous 73-year-old English singer-songwriter and composer, Paul McCartney has an equally talented daughter, Stella. While Sir Paul wrote and sang some of the most well known pop songs ever; Stella grew up to design for Chloe and her own eponymous label. She notes in a CNN interview that growing up with famous parents has been both a blessing and a hindrance as it “certainly opened lots of doors, but also closed some minds.” This recipient of the prestigious Women’s Leadership Award from the Lincoln Center Corporate fund also noted that she learned a lot from her Dad, including his ethics and drive.

Ben Stiller can’t help but be a funny guy as it’s wired into his genetics. Both his parents are comedians, but his Dad, 89-year-old Jerry, especially had an impact.

Ben Stiller says his dad’s influence was nothing short of “magic” — literally. Apparently when Stiller was 10, his father sent him to an old magician for lessons to learn “sleight-of-hand.”

Funny nuances were something he picked up from his hilarious father, in addition to his “focus and commitment,” the famous actor notes. Both men have entertained audiences for decades as laughter and comedy are definitely part of the Stiller legacy.

Have we missed any famous fathers that you would add to this list?  How did your father positively influence you and your family? Share your suggestions and stories with us in the comments below.