The Quest to End Aging 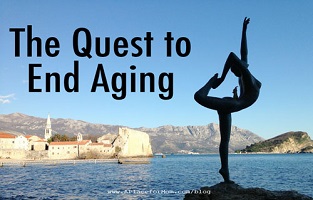 Can new technologies and lifestyles really slow or stop the aging process, or is seeking an end to aging an impossible, pseudo-scientific dream best left to science fiction writers?

Human beings are the only living creatures aware of their mortality or the fact of aging and its inevitability. While some find solace through religion and a belief in the immortality and the indestructibility of the soul – others aren’t satisfied with promises of a metaphysical afterlife. They want to end aging scientifically, here and now on this this earth, on this plane of existence. While some might mock these quests to end aging as foolhardy, an industry led by anti-aging gurus and anti-aging product marketers is as pervasive to this day as it has been for centuries. For instance, even tech giant Google has recently announced a new project called Calico that aims to “combat aging.”

Is Aging an Enemy?

But some serious thinkers do believe that aging is the enemy. In an interesting TED Talk, Aubrey de Grey, a researcher and life-extension proponent not only describes aging as “fundamentally barbaric”, but argues that aging should be treated like a disease. He says that halting the processes that cause aging are definitely within the realm of possibility scientifically speaking, and predicts that lifespan will increase about one year per year. He says that today’s children will have the potential to live over 150 and that people will eventually achieve 1,000 year lifespans and beyond.

The fact that life ends was just as apparent to historic peoples as it is today – perhaps more so. Much as today, immortality of the soul, body or both was sought through religion and spirituality rather than by perpetuating our earthly body. But that’s not to say there weren’t figures who sought to end the aging process of our earthly bodies.

Fountains of Youth feature prominently in historic mythology, and some important historic figures literally believed in the Fountain of Youth. When Spanish Explorer Juan Ponce de Leon explored the New World, and what is now Florida in particular, he wasn’t looking for gold, slaves and riches like Cortez. He was seeking a legendary Fountain of Youth that was said to be in area.

As centuries passed, quick-buck hucksters realized they could make a pretty-penny selling  potions that were said to cure practically every ailment known to man, including many associated with aging. Products like “Professor Mack’s Miracle Elixir of Life” seemed to promise a future without the ailments of aging. In fact, the phrase “Elixir of Life” is also mythological in origin and directly associated with immortality.

A quick Google search for “anti-aging pills” shows that products like Professor Mack’s Miracle Elixir are just as prevalent today, if not more so. For example, celebrity doctor Dr. Oz, who has been heavily criticized by experts for “handing out questionable medical advice that critics say “borders on quackery,” promotes a product on his website with the headline “Miracle Pill to Stop Aging.” Note the common use of the word “miracle” both in the example above and the product which Dr. Oz is promoting.  The use of an authoritative title (“Professor Mack”, “Dr. Oz”) is another commonality of these pitches. These products are everywhere. They are marketed online, in radio and TV infomercials, and magazines – and the promises haven’t changed much since the days of Old West medicine shows and snake-oil salesman.

A lot of people have a lot of ideas about the best way to end aging, or perhaps even achieve immortality of consciousness. Here are three prominent anti-aging and life-extension trends around today:

1. Dietary Fads Such as the Calorie Restricted Diet

One trend in the quest to seek dramatically longer lifespans is the “calorie restricted diet.” Practitioners of this diet eat significantly less calories than a typical person (as low as 800 per day), but would make extra-sure that they were consuming enough nutrients to prevent deficiency diseases. The belief that a calorie restricted diet could lead to longer longevity was born out of animal studies, but new evidence, like this 2012 National Institute of Health study, shows that it does not promote longevity after all. Your best bet is to simply eat healthy and follow general dietary guidelines. “If there’s a way to manipulate the human diet to let us live longer, we haven’t figured it out yet and it may not exist,” wrote biologist Steven Austad in the magazine Nature.

2. Cryonics: Waiting for Technology to Catch Up

While rumors that Walt Disney had his body frozen are false urban legends, some of you may be aware that baseball great Ted Williams had his head cryogenically frozen after his death. Some people have their whole bodies frozen (at great expense). The idea is that one day, even if it’s in the very distant future, that mankind will have the technology to revive and heal cryogenically frozen bodies (or “patients” as the cryonics industry calls them). Another proposition of cryonics proponents is that we may perhaps even be able to “download” our consciousness from a cryogenically frozen brain into a computer so that our mind might live on even without our bodies. One cryonics company, the Alcor Life Extension Company, recently announced it’s the preservation of its 121st “patient”. This definitely sounds like science-fiction, but true-believers argue that there isn’t anything to lose, and that given enough time, these technologies will eventually be possible.

Of course questions are raised not only about whether this will ever be feasible, but about whether it will be possible for cryogenics companies to keep bodies (and heads) frozen until revival might be possible. Of course these facilities have back-up generators in case of power-outages, but it’s not hard imagine business failure, natural disasters or periods of social unrest that would cause these frozen bodies to become thawed or forgotten.

Human growth hormone (HGH) is perhaps most famous for its abuse by unsavory athletes hoping to gain an edge in competition because it does lead to muscle growth. But it has also been the subject of recent attention as an “anti-aging” drug. Some physicians have prescribed human growth hormone off-label (meaning for a purpose beyond it’s stated use) to increase vitality in seniors.  The controversial foundation American Academy of Anti-Aging Medicine promoted the use of human growth hormone to decrease symptoms of aging.  Evidence regarding the promise of HGH is mixed at best.

One study suggests that it may actually accelerate aging. The Mayo Clinic’s position is that “There’s little evidence to suggest human growth hormone can help otherwise healthy adults regain youth and vitality.” And well-known author and physician, Dr. Andrew Weil (who garners more respected in the medical community than celebrity physicians who rely on sensationalism) also seriously rebukes use of HGH for anti-aging purposes:

“I definitely do not recommend the anti-aging supplements being promoted on the Internet and elsewhere as HGH or HGH releasers…(Real HGH is a prescription drug costing about $20,000 per year. HGH ‘releasers’ are in development, but none is currently available.) HGH does decline with age, but there is no evidence to suggest that injections of growth hormone in otherwise healthy adults will extend life or improve general health.”

Physicians also note that not enough is known about side-effects and long-term effects of HGH for it to be considered safe.

Many common vitamin, minerals and other supplements are now being marketed for “anti-aging” purposes to feed on the public’s desire for longer healthier lives. The Foundation for a Longer Life is has long list of fairly run-of-the-mill supplements dubiously relabeled as “anti-aging” products. These include:

Even the over-the-counter painkiller “aspirin” is marketed on their site as life extending product.

So How Do You Live a Long Life?

While it’s possible that one day doctors and scientists may be able to significantly increase the human lifespan, there is no miracle solution right now. A holistic approach that promotes over-all good health will give you the best chance of living of long and healthy life:

What are your thoughts on the issue? Have your purchased anti-aging or life-extension products? Do you think it’s a fruitless activity or a goal to be aspired for?