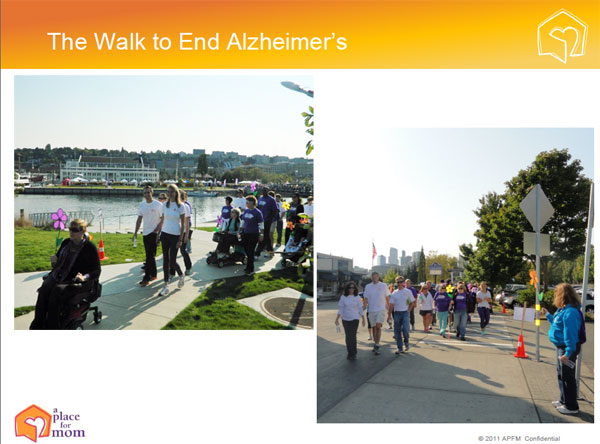 In support of World Alzheimer’s Month, A Place for Mom joined the fight to defeat Alzheimer’s by fundraising nearly $12,000 and participating in Seattle’s September 23 Walk to End Alzheimer’s.

The event was a success and not only helped raise awareness for the debilitating epidemic, but also provided funds to support the nation’s mission to cure the disease by 2025.

A Place for Mom and the Walk to End Alzheimer’s

Last weekend was a busy one here in Seattle as the A Place for Mom team supported the Pacific Northwest’s “Walk to End Alzheimer’s.”

The Alzheimer’s Association reports that 5.4 million Americans currently have Alzheimer’s, or roughly 1-in-8 older Americans—a staggering number for a disease that is the 6th leading cause of death in the U.S. With an aging population reaching 65+ in record numbers, A Place for Mom (APFM) is on a mission to support research endeavors for this perplexing disease that affects so many seniors and their families.

We have had tremendous success over the last month as we joined together to raise money in support of the Alzheimer’s Association. We started our campaign on August 17, and watched as contributions kept growing through the support of not only our employees, but also supportive families and caregivers. I am so proud to share that our final fundraising amount on behalf of the Alzheimer’s Association was $11,647.65!  How amazing!

Thanks to everyone who raised money for Team APFM, as well as to everyone who organized and participated in our company fundraising events, and of course thank you to those who came out on Sunday to join The Walk. The combination of all these efforts truly made a difference for our company and the Alzheimer’s Association.