Alzheimer’s Patients and Caregivers Speak Out 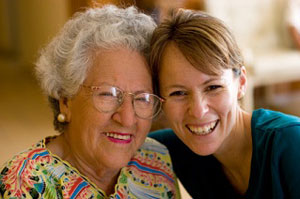 In a new installment of the New York Times series Patient Voices, people in the early stages of Alzheimer’s disease and their loved ones tell their stories about coping day to day.

Alzheimer’s disease is difficult and debilitating — for caregivers as well as for those suffering from symptoms like dementia. Day-to-day life can begin to seem overwhelming, and even caregivers may feel isolated and lonely in dealing with the health issues of their loved ones.

But there’s no need to endure this disease alone. People with Alzheimer’s can seek help from support groups, family, and friends, and both patients and caregivers can take comfort from the stories of others in the same situation. One excellent source for first-hand accounts of coping with Alzheimer’s is the New York Times series “Patient Voices,” which includes audio excerpts and photos of those affected by the disease. Even a quick overview of the page yields valuable words of wisdom.

Seniors with Alzheimer’s and Their Caregivers

John MacInnes, 82, of Bloomfield Hills, Michigan, is one of the Alzheimer’s sufferers who tells his story in Patient Voices. He was still heading up an urban community planning company when he started developing memory problems. After he retired, he was diagnosed with Alzheimer’s when he realized he could no longer balance his checkbook.

“I was devastated,” he says — a reaction that will be all too familiar to many patients and caregivers. “It comes as a bolt out of the blue.” Eventually, though, MacInnes found solace in sharing his words and feelings with his family, and seeking out the help he knew he needed.

So did Sue Roby, 73, of Cleveland, who, along with her husband George, frequently speaks to caregivers about how Alzheimer’s disease is affecting their lives. The care and love George provides has been a boon. “I have a wonderful husband…I call him my ‘handler’ and I’m his happy nuisance!”

Through family meetings and reaching out to friends, George and Sue have helped one another maintain a sense of perspective and humor, despite her prognosis.

“If you can find a way to have a laugh,” George says, “then everybody benefits….Humor can bail you out.”

Seniors aren’t the only ones affected by Alzheimer’s disease. When the condition has an early onset, it can be shocking and frightening for both the sufferer and loved ones.

“I woke up one day and didn’t know who I was,” says Laura Mercer, 50, of Charlotte, NC. It was a frantic day for both Laura and her husband Greg. But, as with older people who have Alzheimer’s, the key lies in learning to cope with a condition that isn’t going to go away.

“It’s difficult, but hey, nobody gave me a choice, so I just have to do the best I can,” says Gwen Richards, 55, of Kansas City, who is already suffering from memory loss.

“We get up each day and we try to make the most of it,” Greg Mercer says.

To listen to the audio selections and read more about the Alzheimer’s patients and caregivers interviewed, click here.