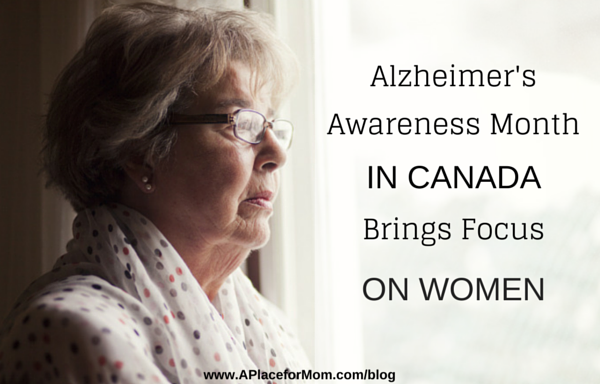 This month marks Alzheimer Awareness Month in Canada. The campaign kicked off on January 6 and specifically focuses on educating women, who are doubly affected by the disease. Learn what is being done in Canada to raise awareness and fight Alzheimer’s this month.

Alzheimer’s disease is a global epidemic and Canada feels its heartbreak as much as any other country. It is estimated that 747,000 Canadians are living with Alzheimer’s and that by the year 2031 almost 1.4 million Canadians will be living with some type of dementia.

One in 5 Canadians over the age of 45 provides some kind of care to seniors with health problems, and almost 25% of caregivers are older than 75 years old.

In addition to the physical and emotional toll of Alzheimer’s, Canada is also facing the crushing financial impact of disease. The combined direct and indirect costs (which includes both medical costs and also lost earnings) is $33 billion annually. That number is expected to rise to $293 billion by 2040.

There’s no question that the epidemic facing Canada affects all of its citizens. However, the Alzheimer’s Society of Canada says that women are significantly more affected by the disease than men.

Up to 72% of people with Alzheimer’s in Canada are women, mainly because women live longer than men and age is the number one risk factor for Alzheimer’s. The Alzheimer’s Society also says that the same amount of women give their time and money to be family caregivers.

To honor Alzheimer Awareness Month, the Alzheimer’s Society of Canada has launched a campaign called, “The 72%.” The campaign strives to educate women over 40 on early warning signs of the disease and is encouraging women to be on the lookout for early signs in themselves and loved ones. They are also offering resources on their website to help people who recognize any of the early warning signs as well as resources for women who may be caring for someone with Alzheimer’s.

Another compelling aspect of the campaign encourages caregivers to share their personal stories of loved ones fighting the disease.

What do you think about the Alzheimer Society of Canada’s campaign to target women and raise awareness? What early warning signs of the disease do you want to know about? Share your thoughts in the comments below.

Author
A Place for Mom Staff