Early-onset Alzheimer’s disease affects more than 200,000 people in the United States, many of them in their 40s and 50s. Fortunately, recent breakthroughs have uncovered risk factors for this form of dementia and identified new methods for early detection and treatment. 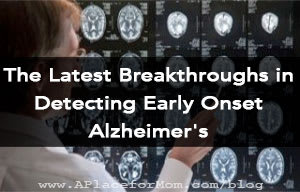 What is Early-Onset Alzheimer’s Disease?

An uncommon form of dementia, early-onset Alzheimer’s disease (AD) strikes people as young as their 30s, though it is more often seen in people in their 50s. Unlike Alzheimer’s that affects people over age 65, early-onset AD has been linked to inherited genes, and it often runs in families.

Unfortunately, early-onset AD can be difficult to diagnose because physicians do not look for Alzheimer’s in younger patients. So, knowing your family history of the disease is important as is keeping track of memory loss symptoms.

The latest studies on early-onset AD have shown promise in helping detect this condition early on and in finding new treatments. Here is a summary of some of recent breakthroughs:

Scientists at the University of Texas Medical School in Houston have developed a spinal fluid test that can detect the beta amyloid protein clusters linked to Alzheimer’s disease. Present in the brain, these clusters are ultimately dumped in the spinal fluid years before Alzheimer’s symptoms occur.

Taking spinal fluid is incredibly painful for patients. So researchers hope to use this study as a platform for developing a blood test that detects the protein clusters.

At Harvard University, scientists have discovered that the REST protein may protect seniors against Alzheimer’s. The REST protein, present in the brains of fetuses, is inactive after a baby is born. However, it becomes active in older brains, protecting certain neurons from stress. In people with Alzheimer’s, the REST protein is depleted, suggesting that the presence of beta amyloid clusters is not enough to cause Alzheimer’s.

Although scientists hope this information could help in developing new dementia drugs, they caution that more research is needed to determine the reason behind the decline of REST in older adults.

Researchers at Georgetown University and the University of Rochester have developed a blood test that indicates risks for Alzheimer’s disease. The test examines the amounts of certain fats in the bloodstream.

Based on clinical trials, the blood test shows with 90% accuracy whether an adult will develop Alzheimer’s within the next three years. Experts caution that the test requires additional study before it can be applied outside of clinical trials.

Sapphire II, a new eye exam technology, could diagnose Alzheimer’s in a matter of minutes. Developed by Cognoptix, an Alzheimer’s research company, Sapphire II is a laser-based reading device and consumable ophthalmic ointment.

According to clinical trials, Sapphire II can detect a beta-amyloid signature in a person’s eyes. The presence of beta amyloid protein clusters in the brain is a common sign of Alzheimer’s disease. Cognoptix is seeking FDA approval to use Sapphire II to help physicians diagnose suspected cases of Alzheimer’s.

5. A Take-Home Test for Alzheimer’s

A 12-question test, the Self-Administered Gerocognitive Examination (SAGE) may help spot cognitive decline in as little as 15 minutes. Researchers at Ohio State University developed the test and administered it to over 1,000 research participants. Results showed that 28% of test takers demonstrated symptoms of cognitive decline, which correlated to more detailed cognitive testing.

Ideally, a person whose SAGE score signaled potential cognitive decline would go to the doctor sooner for a diagnosis. Experts view the test as a baseline for cognitive function and emphasize that it is not a substitute for a medical exam.

6. An App for Detecting Alzheimer’s

The brain-boosting app Neuroracer, developed by Alkili Interactive Labs, may help detect early signs of Alzheimer’s. Working with pharmaceutical company Pfizer, Alkili conducted a study on Neuroracer that showed it improved brain activity and multitasking skills for older players. These results translated to improved cognitive function in the real world.

Alkili hopes that the app could become a benchmark for other testing and pave the way for more mobile video games that could serve as medical tools.

In a study from the New York Stem Cell Foundation, researchers developed stem cell lines that they hope will reveal how Alzheimer’s develops in the brain.

Another breakthrough in early detection, this research has the potential to help physicians diagnose Alzheimer’s before symptoms appear and may serve as a platform for drug testing.

A study from Brown University has shown that signs of Alzheimer’s can be detected in infants; specifically, the gene (APOE-e4) that predisposes around 25% of the U.S. population to Alzheimer’s disease.

This same gene is present in 60% of adults diagnosed with Alzheimer’s.

Researchers say that these results do not establish a direct link to Alzheimer’s, but they do provide information about risks for Alzheimer’s later in life. This study can serve as a basis for future research on prevention and early detection of the disease.

9. A Retina Test for Alzheimer’s

In tests conducted on mice, researchers at Georgetown University found that Alzheimer’s thins the retina by nearly 50%. This suggests that the loss of retinal layers could be related to the loss of brain cells in Alzheimer’s, meaning a simple eye test could one day become the pathway for predicting this disease.

Further research is needed to determine whether individuals with Alzheimer’s show the same retinal loss as mice. If so, the retinal test could one day become an essential tool in early Alzheimer’s detection

Looking to link sense of smell to cognitive decline, researchers from the University of Florida used peanut butter to confirm Alzheimer’s diagnosis. Ninety participants were asked to smell a spoonful of peanut butter. Only those with a diagnosis of early stage Alzheimer’s struggled to smell it.

Because sense of smell often fails early on for Alzheimer’s patients, researchers believe this test (and future ones like it) could become a valuable tool in early detection.

However, other experts warn against such a simple test for diagnosing such a complex disease.

What do you think of the recent breakthroughs in Alzheimer’s research? What other studies do you know of that may lead to methods for early detection or advances in treatment?

Author
Jennifer Wegerer
Sign up for our newsletter
Get insights and articles in your inbox.